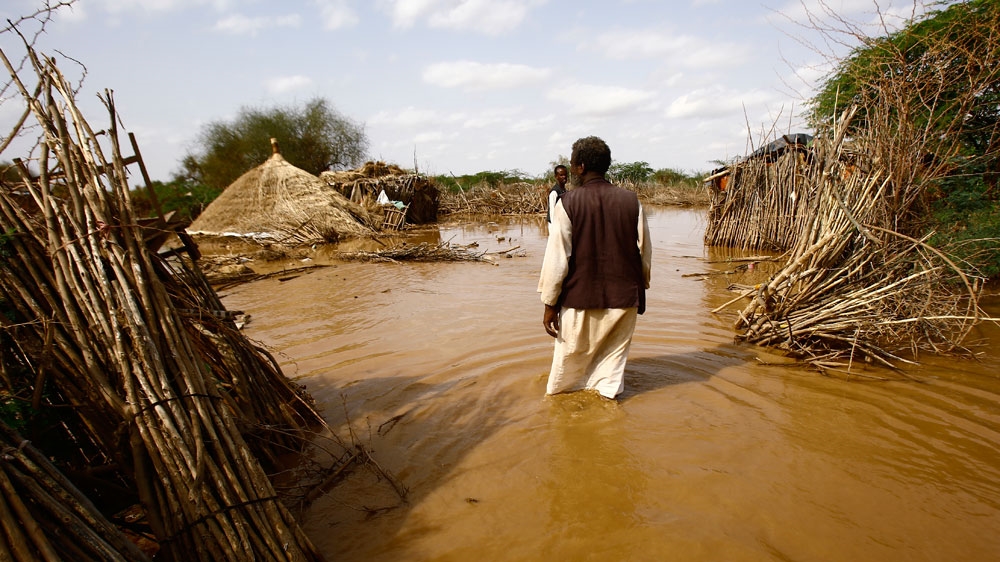 JUBA (HAN) August 15.2016. Public Diplomacy & Regional Security News. Thousands of houses have been destroyed and several villages submerged after flooding triggered by torrential rainfall killed 100 people across Sudan, according to an aid group in the country.

The Sudanese Red Crescent Society reported on Sunday that 25 people died in eastern Sudan’s Kassala, and around 8,000 houses have been destroyed since heavy rains lashed the state two weeks ago.

Nationwide, at least 100 people were killed, the group said.

Thousands of people in the impoverished eastern region bordering Eritrea were forced to flee after the river Gash burst its banks, flooding entire villages inhabited by farmers.

Many people were sheltering in makeshift grass huts on hilltops, after floodwaters also cut off the main highway between east Sudan and the capital, Khartoum.

An AFP news agency photographer, who toured two flood-hit villages in the area, said villagers were forced to wade into waist-high water as they looked for food, drinking water and medicines amid a shortage of supplies.

“We had no time. We simply fled, taking our children when our village was flooded in the night two weeks ago,” Taha Mahmoud, chief of Makli village in Kassala, told AFP.

“We are eating just one meal a day. Children are falling sick, and doctors are miles away.”

Authorities said water levels were also rising on the Blue Nile along the border with Ethiopia after continuous rainfall there.

The Blue Nile flows to Khartoum where it meets the White Nile and they become the Nile which flows into Egypt.

UN aid agencies had previously warned of a flooding danger in Sudan between July and November.

Aside from Kassala, other states affected by the flooding included Sennar, South Kordofan, West Kordofan and North Darfur, the UN Office for the Coordination of Humanitarian Affairs (OCHA) said earlier this week.

Heavy flooding since early June has affected more than 122,000 people and destroyed over 13,000 houses in many parts of the country, according to OCHA.

A downpour in August 2013 was the worst to hit Khartoum in 25 years, and affected tens of thousands of people.

Those floods killed about 50 people, mostly in the capital.