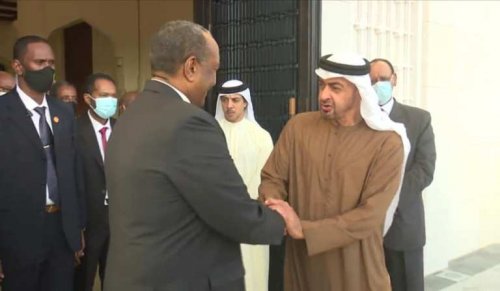 The meeting took place after a written response Khartoum sent to Abu Dhabi last April and a phone call by the Emirati crown prince to al-Burhan on the first of May.

In statements to reporters flowing their return to Khartoum on Monday, the Minister of the Cabinet Affairs Khaled Omer Youssef said Sudan conveyed to the UAE its position on the Emirati initiative on the border dispute with Ethiopia.

“Sudan has conveyed to the Emirates its clear position in the (border) agreement that has settled the issue since 1972,” stressed Youssef.

In line with the 1972 agreement, Ethiopia reaffirmed its commitment to the 1902 and 1903 agreement between the two countries and accepted to place border markers as agreed in these agreements.

Khartoum did not release the content of the UAE initiative but Sudanese officials say that the Emirates propose to fund agriculture schemes in the Fashaga using Ethiopian and Sudanese farmers.

Sudan and Ethiopia will get 40% of the benefits of the project and the remaining 20% will go to the UAE.

With regard to the Grand Ethiopian Renaissance Dam, Youssef pointed out that al-Burhan informed MBZ that Khartoum wants a legally binding agreement on the filing and operation of the GERD to protect Sudanese and Egyptian interests.

The UAE proposal on the GERD does not consider the 2015 declaration of principle and ignores the progress achieved during the past 9 years.