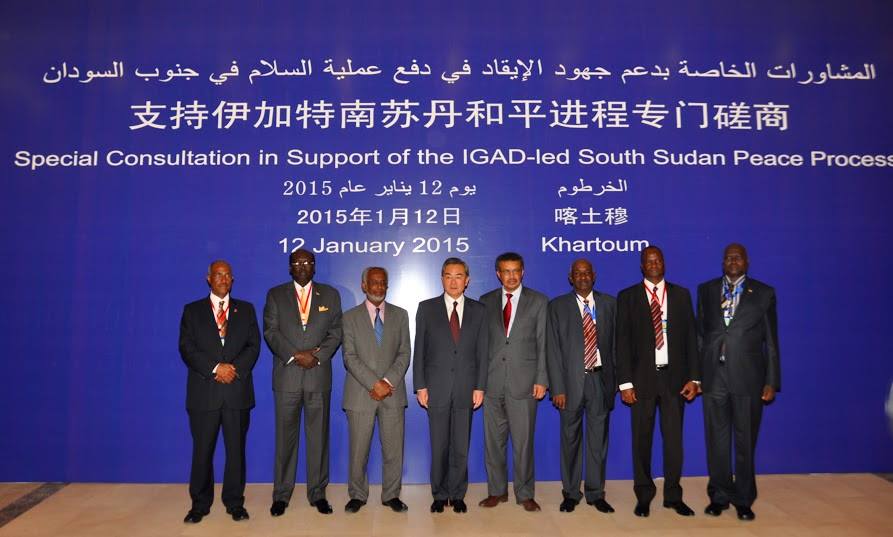 A one-day special China consultation meeting in support of the IGAD-led South Sudan peace process and security situation was concluded on Monday in Khartoum, capital of Sudan. Focusing on the urgent necessity to end the conflict in South Sudan, the consultation heralded a new re-commitment reiterated by the representatives of the Government of the Republic of South Sudan and the Sudan Peoples’ Liberation Movement in Opposition (SPLM-IO).

It also sent a clear signal of giving peace a chance over war for the wellbeing of the people of the South Sudan. Initiated and organized by the Government of China and hosted by the Government of Sudan, the one-day conference dwelt at helping the warring factions make the IGAD-led peace process the only way out from the crisis. The meeting brought together Sudan’s Foreign Minister Ali Karti, Ethiopian Foreign Minister and current Chair of the IGAD Council of Ministers Dr Tedros Adhanom, and China’s Foreign Minister, Wang Yi.

The Government of South Sudan was represented by the Minister of Foreign Affairs and International Cooperation, Barnaba Marial Benjamin, and the SPLM-IO was headed by its Chief negotiator, Taban Deng Gai. Also present were IGAD Special Envoys including Ambassador Seyoum Mesfin of Ethiopia, General Sumbiyo of Kenya and Mohammed El-Daby of Sudan. Sudan’s Foreign Minister Ali Karti gave a briefing to the media at the end of the meeting and noted that this “special consultation in support of the (IGAD)-led South Sudan peace process” opened up new horizons in which the parties recommitted themselves to uphold a cessation of hostilities agreement and work jointly within the auspices of IGAD-led mediation process so as to silence guns and put a stop to the war.

The Foreign Minister unveiled that the conference also gave a window of opportunity for the conflicting parties to look into the way forward in seeking and pursuing durable peace. He also stated that the consultative dialogue helped the parties cherish the significance of facilitating the safe delivery of humanitarian and relief services as well as better the security situation to the needy and conflict-affected communities. Foreign Minister Wang Yi on his part noted that China had remained seized to the success of the IGAD-led peace mediation process since the inception of the conflict citing that he had held talks with representatives of the two conflicting parties of South Sudan for three times.

The Foreign Minister also affirmed that his country would also show a sustained support to IGAD-led peace talks and its Monitoring and Verification Mechanism, disclosing that China would personnel to engage in the Mechanism with the view to usher a new era of peace in South Sudan. China at the UN Security Council and other global events placed emphasis to an immediate and peaceful resolution of the crisis in South Sudan, he said. Wang Yi further added that China was appealing the international community to stand on the side of IGAD-led mediation process