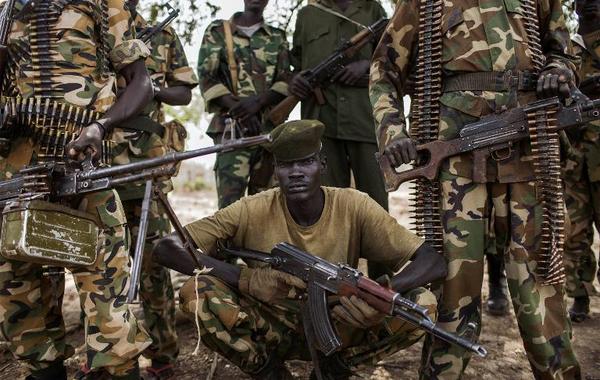 JUBA (HAN) August 31.2016. Public Diplomacy & Regional Security News. The leadership of the South Sudanese President, Salva Kiir, is a violent dictatorship and the country will not see peace as long as he remains the president, says media official in the office of the former First Vice President, Riek Machar.

In an interview with the Voice of America (VOA) Nightline Africa on Sunday, James Gatdet Dak, spokesperson for the leader of the opposition faction of the Sudan People’s Liberation Movement (SPLM-IO), said President Kiir was only interested in violence as a means to maintain his leadership and has no vision for the new country.

Dak was responding to the recent call by President Kiir to try to persuade the region and the international community at large to ensure that Machar would not come back to Juba and take part in the Transitional Government of National Unity (TGoNU) as its legitimate First Vice President, despite his controversial removal and replacement with his former chief negotiator, Taban Deng Gai.

Kiir was opposed to regional and international calls to reinstate Machar, arguing that his former deputy’s return to Juba as First Vice President would “prolong war” in the country.

The President further argued that he has a good working relationship with his new first deputy, Gai, whom he described as someone “cooperating” with him.

However, Machar’s spokesperson said that the comments by President Kiir to further “remove his peace partner” indicated that he was not interested in peace or to implement the peace agreement he signed in August last year.

Dak said the relationship between Kiir and Gai was not a “cooperation” to fully implement the peace agreement, but was based on the fact that Gai had “surrendered” to Kiir and the two of them agreed to scrap from the IGAD brokered peace deal the main provisions which were vital for various sectors reforms and change in the country.

He said President Kiir only wanted a “stooge” as his deputy who would agree with the status quo in the country.

NO PEACE WITH KIIR

In a separate phone interview with Sudan Tribune on Tuesday, the opposition leader’s spokesperson said it will be difficult for the country to achieve peace with President Kiir as the head of state.

“I personally have a strong feeling that as long as Salva Kiir remains the President of our country, there will never be peace and prosperity, but only a vicious cycle of violence, corruption, tribalism and lack of services delivery and development” Dak told Sudan Tribune when contacted on phone.

“The people of South Sudan will continue to suffer because they will only be hearing from him [Kiir] a manipulated, non-committal and violent so-called peace that will instead continue to kill people, loot their property, rape young girls and women and displace populations. His leadership is synonymous with violence, war after war,” he further claimed.

He charged that after the 15 December 2013’s civil war which he said the President created, but was brought to an end by a peace agreement in August 2015, a leader who had his country and people in his heart and wanted peace and stability would not again have violated the agreement by attacking his peace partner.

The leadership in Juba, he said, is currently on a mission to deceive the people of South Sudan, leaders in the region and in the world at large with “false promises” in their “desperate” attempt to seek support and later on forget about the promises.

Dak further claimed that President Kiir has no vision for South Sudan and was not ready for what he would have done next for the welfare of the people after independence in July 2011. He added that the President and his “corrupt” officials close to him only knew one thing, and that was to “loot the country and put its resources into their pockets for personal benefits and kill or torture their subjects who dare to question their bad deeds.”

He also said the South Sudanese leader is a dictator who will never allow democracy and freedoms to take roots in South Sudan.

The East African regional bloc, or IGAD, looks divided over whether to reinstate Machar or recognize the new First Vice President, Gai, despite their earlier communiqué which suggested Machar’s reinstatement.

The situation has also led to the Joint Monitoring and Evaluation Commission (JMEC), admitting it is “confused” and may work with the new first deputy as a “no option” position. JMEC, a body established under the Agreement on the Resolution of the Conflict in South Sudan (ARCISS) to monitor the full implementation of the peace deal, is chaired by former President of Botswana, Festus Mogae.

IGAD’s heads of state and government released a communiqué on 5 August in Addis Ababa, asking for reinstatement of Machar and for Gai to step down.

However, U.S Secretary of State, John Kerry, on his visit to the Kenyan capital, Nairobi, last week said there was nothing wrong in replacing Machar with Gai, saying the peace deal had provided for replacements of officials.

Machar, who has just recovered from “exhaustion and swollen legs” after fleeing Juba on 8 July and walking to the neighboring Democratic Republic of Congo (DRC) and then transferred to Khartoum, Sudan, has not yet come out with public reaction to the new situation.

His spokesman, Dak, earlier told the media that his boss will make a public statement at an “appropriate time.” (ST)