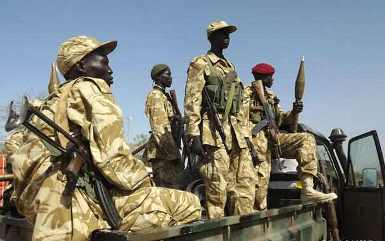 JUBA (HAN) August 4.2016. Public Diplomacy & Regional Security News. South Sudanese national army, the Sudan People’s Liberation Army (SPLA), loyal to President Salva Kiir has for the first time in three weeks publicly admitted that it has “resolved to crush SPLA-IO” forces loyal to former First Vice President, Riek Machar, despite their earlier denials that there was no heavy fighting going on around Juba.

The opposition group under Machar had been saying that tens of thousands of troops loyal to President Kiir have been on offensive in the bushes around the capital trying to hunt down Machar from his places of “hiding.”

Although President Kiir’s officials have been downplaying the claims by the opposition, the revelation from the military spokesperson that Machar’s forces will be “crushed” and will have “nowhere to hide” indicates that heavy fighting had been going on in the deep forests around the capital.

The military official spokesperson in the statement he posted on his Facebook page on Wednesday evening and widely circulated on social media, also congratulated the newly appointed First Vice President, Taban Deng Gai, on his commitment to peace.

However, opposition official loyal to Machar dismissed the threats to crush their forces around Juba, saying instead they were ready to take control of Juba, describing Koang’s claims as “wishful thinking” to try to raise the moral of their defeated troops plus their police forces.

They also described Gai’s relationship with President Kiir as not about implementing the peace agreement, but “rather about mutually violating and destroying it.”

Gai, Machar’s spokesperson said, upon swearing in as new “illegal” first deputy started by scrapping the provision that recognizes existence of two rival armies in the country during the transitional period and also compromised that President Kiir’s faction takes the speakership of the transitional parliament without “democratically” contesting it between the parties.

He said the two men were only determined to return the country pre-August 2015 peace agreement and avoid implementing the needed reforms to change the nation. (ST)