Home frontpage South Sudanese have a rich history of dialogue, it’s what will save... 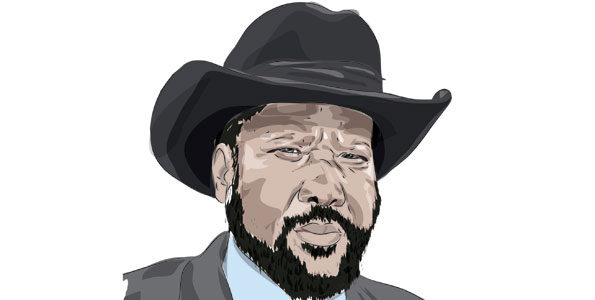 I am deeply concerned about the parents who can no longer feed their children because of our shrinking economy.

I am also concerned about the growing number of street children and women who have lost everything due to the ongoing political situation. I am deeply concerned that all our citizens are distraught over the current political conflict and drastically declining economy.

As leaders, we have both moral and constitutional responsibility to protect and preserve the unity of our people, end the suffering, restore the economy, and refocus on nation building.

Our country descended into political crisis in 2013 as a result of an unconventional struggle for power. The political crisis was immediately followed by extreme violence that shook the foundation of our young republic. As a result of these developments, our country is deeply divided and the continuing conflict is threatening to tear it apart.

All my comrades and I fought for this country not to tear it apart, but to preserve its unity, guarantee its economic viability, and ensure enduring freedom and equality for its people. National unity is the means through which we can preserve, protect and restore the integrity of our country.

In pursuit of national unity and reconciliation, my government has undertaken many efforts in an attempt to bring the conflict to an end and to create a favourable environment to reconstitute national consensus. These efforts resulted in the signing of the Agreement on the Reunification of the SPLM, which essentially addressed all the issues that created discord within the party.

We have also signed the Agreement on the Resolution of Conflict in the Republic of South Sudan (ARCISS), which settled political and military aspects of the conflict.

While these agreements have to a large extent addressed many political issues, there remain a number of fundamental issues that require a much broader South Sudanese forum. In particular, our political settlements have often ignored longstanding grassroots grievances. For example, the SPLM Reunification Agreement and the ARCISS have narrowly addressed the power and military aspect of the conflict.

To link political settlements with grassroots grievances, the next stage, therefore, requires the participation of the broader South Sudanese people in order to fully restore peace and tranquillity in the country.

As a measure to consolidate peace in our country and to bring our people together, I am initiating the process of National Dialogue. Dialogue has been a hallmark of our liberation struggle. We had always used dialogue as a mechanism to manage our differences and to recommit ourselves to our unity of purpose and our resolve to set our people free.

The SPLM first entered dialogue with the members of Anyanya 2, a process that consolidated the unity of the South Sudanese in their struggle. When the movement split in 1991, we held the first National Convention in Chukudum in 1994 where we recommitted ourselves to our unity as a measure to achieve our liberation objectives.

In 1999, we supported the Wunlit Peace Initiative between the Nuer and Jieng communities, a process that served as a forerunner for the SPLM unity in 2002 and 2003 when Dr Riek Machar and Dr Lam Akol, respectively, rejoined the SPLM.

When the movement experienced turbulence in 2004, we convened a high level dialogue in Rumbek, paving the way for the signing of the Comprehensive Peace Agreement in January 2005.

In 2005, we initiated the South-South Dialogue that culminated in the Juba Declaration, during which the Southern Sudan Defence Forces (SSDF), under the leadership of the late Gen Paulino Matip Nhial, were successfully integrated into the SPLA.

Lastly, in 2010, just before the referendum, we held an All South Sudanese Political Parties Conference where we agreed to unite our people to end all violence so as to give them the golden opportunity to vote to determine their destiny.

Redefine the basis of unity

National Dialogue in my view is both a forum and process through which the people of South Sudan can gather to redefine the basis of their unity as it relates to nationhood, citizenship, and a sense of belonging.

This opportunity allows the people of South Sudan to discuss issues related to the structure of the state, renegotiate the social contract, and revitalise their aspirations for development and responsibility in the world of nations.

I take the view that a successful National Dialogue can only be realised if and when all the people of South Sudan have broadly participated, agreed, and accepted its agenda and outcomes.

For this to be realised, the process of National Dialogue must be seen as credible, genuine, and open to all the people of South Sudan, and it should have reliable guarantees for its outcomes to be accepted and implemented.

To achieve this, I am throwing the full weight of my government behind it, but the government will not lead or control this process.

The government shall be a stakeholder in the National Dialogue. I strongly believe in a South Sudanese-led process, and so we have identified our fellow citizens, who are persons of consensus with stature and integrity, to steer this process.

My government will guarantee safety and freedom of all the actors who are going to participate in the National Dialogue, including those who are currently out of the country, some of whom are opposed to the government.

To ensure the credibility and effectiveness of the National Dialogue, we shall work very closely with regional, continental and international partners, including Igad, JMEC, AU, the Troika, and the UN.

Salva Kiir is the President of South Sudan. The above is excerpted from a speech he gave on December 14 announcing the commencement of the National Dialogue.