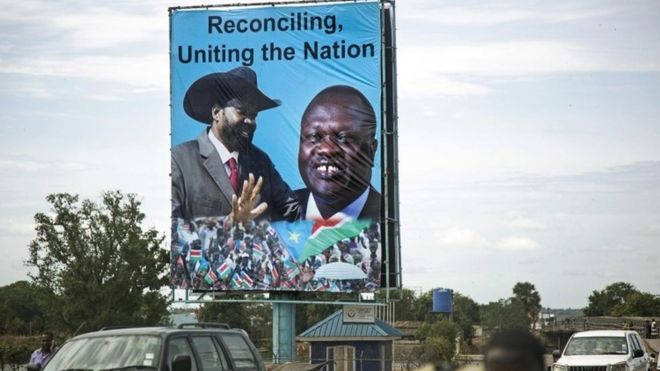 He is expected to be sworn in later as the first vice-president in a new unity government.

This is a key part of the deal aimed at ending more than two years of conflict that has killed tens of thousands and left two million people homeless.

Mr Machar fled Juba at the start of the conflict in December 2013.

He had been accused of trying to organise a coup, which he denied – but it set off a round of tit-for-tat killings, which developed into a full-blown conflict.

Mr Machar, wearing a light-coloured shirt, was greeted by ministers and diplomats as he stepped out of his plane, the AFP news agency reports.

He is expected to head immediately to the presidential palace to be sworn in as President Salva Kiir’s deputy.

The civil war broke out over tensions between Mr Kiir and Mr Machar, who was sacked as vice-president in July 2013.

The BBC’s James Copnall in Juba says once the government is formed, donors will start stumping up money – crucial as the economy is at rock bottom.

However, it is not necessarily the end of the conflict as both sides have continued to clash despite a ceasefire signed in August, he says.

There are also rebel groups which have not signed the peace deal.