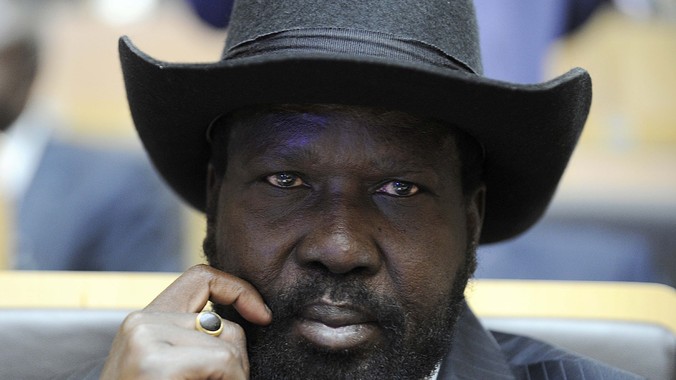 JUBA (HAN) July 26.2016. Public Diplomacy & Regional Security News.  South Sudan President, Salva Kiir, has not indicated willingness to heed an appeal by the head of Roman Catholic, whom he personally met and held talks aimed at ending conflict in 2015 in Kampala, capital of neighbouring Uganda and who later had to send a special envoy to deliver peace message.

Pope Francis dispatched a special message of peace to president Kiir and his former first deputy in government, Riek Machar, but whose letter could not be given to him after he went into hiding following the outbreak of the violence clashes between the rival forces at the presidential palace in Juba.

President Kiir received his letter from Cardinal, Peter Kodwo Turkson, an envoy of the Roman Catholic Church to South Sudan, who arrived in Juba recently for a solidarity visit during which he was to deliver the pope’s message to president Kiir and the first vice president Riek Machar.

The Vatican special envoy told media last week his visit was a special gesture on the Pope’s part and he has been following developments in the country’s peace efforts with keen interest.

Speaking in an exclusive interview with the UN sponsored Radio Miraya Cardinal Turkson said he was in the country on a solidarity visit to deliver the pope’s message.

Cardinal Turkson celebrated Sunday Mass at St Theresa’s Cathedral Kator on arrival at which he urged the people not to give up on hope, despite the recent events that have left a trail of destruction in the country.

The religious leader called on the leaders to unite and work for the common good of the people and help the country heal from its past.

“The big and the crucial thing is that South Sudan must heal, it must take up all and develop and grow in peace and that is what must be ensured and assured for the people and anything that we can do to help and facilitate the realization of that, that’s what I think we can do as a church,” he added.

South Sudan has been trying to come out of the civil war caused by political rivalry between the First Vice President and the President. Violent clashes across the city have left tens of thousands of people dead since December 2013 and a recent flare-up of fighting has caused more casualties, scores of displaced people and a serious humanitarian crisis.

Although a cease-fire is currently in effect in Juba, the threat of more violence continues to loom large.

“It’s conflict that breaks up among the military forces and always with a lot of deaths and the result is always that there is spill over in terms of the civilian population who are scared and leave their homes and are looted when they try to get back sometime they find somebody has lived in the home,” the Pope’s special noted.

He also observed that a lot of the women and children have sought refuge in churches and in schools and that is where they live and the priests, brothers and nuns are trying to take care of them as best as they can.

He expressed hope that upon his return to Rome later this week it will be possible to send some concrete aid back to the archbishop as a help from the side of the Holy See.

A devoted catholic, president Kiir received his letter and assured the special envoy of his commitment to peace but observers say nothing has changed since he met and held talks about peace with the special envoy.

He has instead threatened to wage a war against regional force to protection civilians. Kiir also stopped going to the church on regular basis in protest of religious preaching touching hard on the performance of his administration and how he has failed to manage the affairs of the country. (ST)