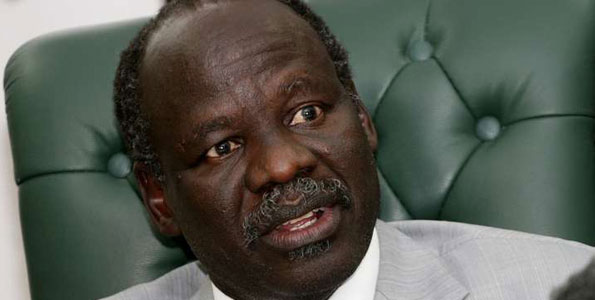 He called on President Salva Kiir to leave power.

Dr Akol was the Agriculture minister in the unity government and is the leader of the opposition Sudan People’s Liberation Movement-Democratic Change (SPLM-DC) party.

He also spoke against rebel leader Riek Machar, whose forces have clashed in recent weeks with government troops loyal to President Kiir.

Dr Akol was the president’s only real opponent in a 2010 election when the country was still a semi-autonomous territory.

“There is no more peace agreement to implement in Juba,” Dr Akol said at a press conference in the Ethiopian capital, Addis Ababa.

“All of us agree that the regime in Juba must change,” he added.

After gaining independence in 2011, South Sudan descended into civil war in December 2013.

Under the terms of an August 2015 peace deal, the 30 ministerial posts are split between President Kiir, Dr Machar as first vice president, as well as opposition and other parties.

But Dr Machar has fled the capital, and President Kiir has appointed a replacement from within the ex-vice-president’s SPLM/A (IO) party, laying bare fractures within the administration and opposition.

Dr Akol said he was working with other opposition figures so that anti-government resistance could be “consolidated”.

“Since the agreement is dead and there is no free political space in Juba, the only sensible way to oppose this regime so as to restore genuine peace… is to organise outside Juba,” he said.