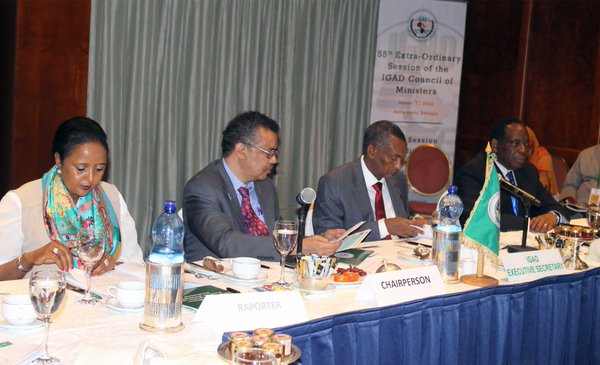 Nairobi – IGAD’s Foreign Ministers today met in Nairobi, Kenya to address the escalation of violence in South Sudan. The Ministers were joined by the Troika cluster of nations, the European Union as well as representatives of the International community.

The Ministers noted with utmost concern that the ongoing violence has now reached dangerous, intolerable and unacceptable levels.

While expressing their sympathy and condolences to the families of those affected by the violence, the Ministers have demanded for immediate cessation of violence and unconditional opening of the airport, and roads to allow access for humanitarian assistance.

The Ministers also demanded for an immediate return of the soldiers to their bases complete with their artillery.

The Ministers also called upon the leadership and the people of South Sudan to as a matter of urgency to lay down arms so as to normalize the country.

Should the leadership of South Sudan not adhere to these immediate demands, IGAD’s council of ministers proposed an immediate revision of the mandate of UN peacekeeping force in Juba to allow for more soldiers in capital city Juba and its environs so as to enhance ongoing peace keeping efforts and the enforcement of the resolutions by the IGAD council of ministers.

Further, the Ministers recommended that those responsible for the current wave of violence be held accountable for their actions.

Those present at the meeting also recognized the important leading role played by regional leadership, specifically IGAD, in resolving the conflict in Sudan.

H.E. Dr Tedros Adhanom, Minister of Foreign Affairs of the Federal Democratic republic of Ethiopia and Chairperson of the IGAD Council of Ministers, chaired the meeting.