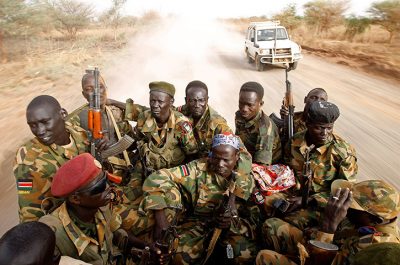 JUBA (HAN) February 24, 2016 – Public Diplomacy and Regional Stability Initiatives News. The general command of the Sudan People’s Liberation Army (SPLA), which is the official army of South Sudan, warned on Tuesday of security vacuum should its forces withdraw from the national capital, Juba, in implementation of the security arrangements signed with the opposition faction of SPLA-IO.

Soldiers from the South Sudanese army (SPLA) jump off the back of a truck while on patrol in the capital, Juba, following the December 2013 outbreak of violence (Photo: Reuters)

About 80% of the several thousand troops stationed at the strategic entry points and junction leading out of Juba town withdrew on Thursday morning, according to South Sudanese defense minister.

Addressing a withdrawal ceremony of the forces on Thursday, defense minister Kuol Manyang Juuk commended the soldiers for exhibiting nationalism in defending the country and the constitution.

Speaking at the same function broadcast by the state owned South Sudan Television (SSTV) on Thursday, SPLA’s chief of general staff, Paul Malong Awan, urged the soldiers to exercise patience wherever they will be deployed and to provide adequate security and protection to the citizens and their properties.

The announcement of the withdrawal is interpreted as a humiliating setback for senior military officers and senior government officials who have been obstinate and showed unwillingness to accept mounting regional and international pressure to implement the security arrangements as per the October 2015 security deal which the two sides signed in Addis Ababa, Ethiopia.

“Our troops have completed withdrawal in Juba. As you have seen yesterday, they left Juba already. This was supposed to be done when there is a force to take complete control so that there is no security gap. Now this withdrawal of essential units without immediate replacement will create security vacuum,” said deputy chief of general staff for operations, Lt General James Ajonga Mawut, on Tuesday.

The government is expected to deploy a total military and police force of over 5,000 in Juba, as part of its joint force with 2,910 from the opposition SPLA-IO.