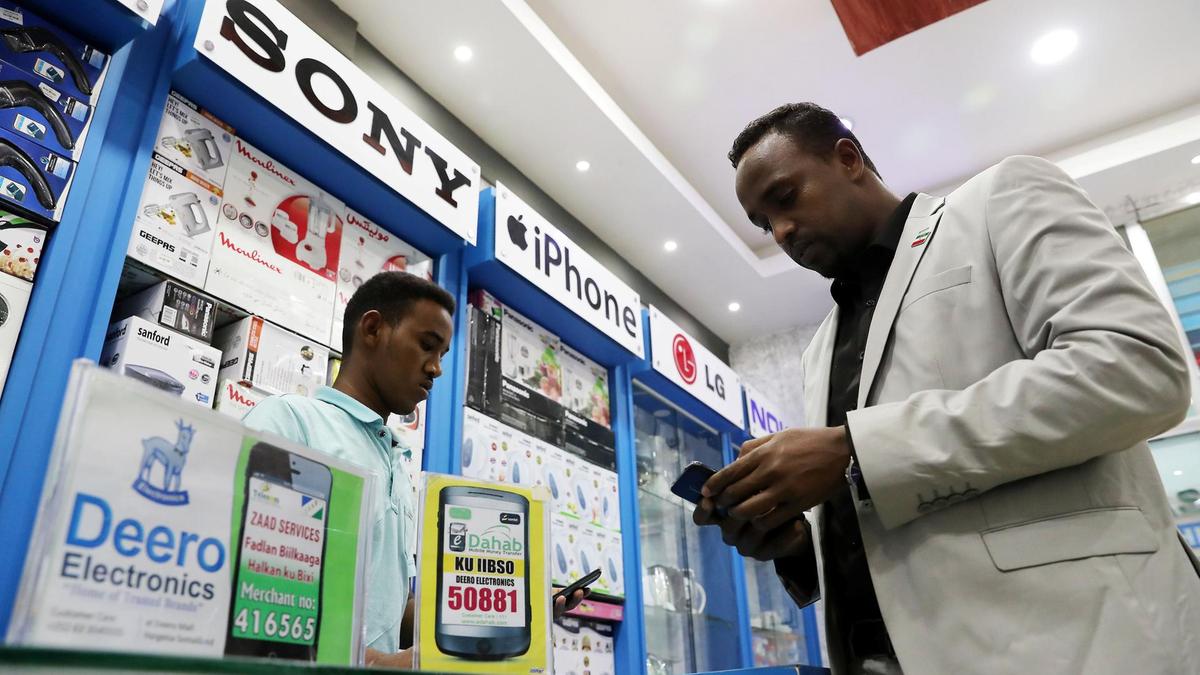 Abdul Rashid has sold sweet Somali tea on the muddy streets of Hargeisa for decades. As night falls in the capital of breakaway Somaliland and worshipers flood out of the mosque, a handful congregate around his rickety table. While he pours from a flask into paper cups, buyers type a string of numbers into mobile phones, take their tea and go on their way.

A cup of Mr Rashid’s tea costs 2,000 Somaliland shillings – equivalent to $0.25 or Dh0.92 – and his customers pay almost exclusively with their mobile phones. “I never see cash,” he tells The National.

Mr Rashid is not alone. Across Somaliland – which declared independence from Somalia in 1991 but is yet to gain recognition from the international community – people are turning away from cash and embracing mobile money. This makes the region, with its tiny livestock-dependent economy, a candidate for the world’s first cashless society.

“It is the most incredible service we have,” says Abdinasir Ahmed Hersi. He is the director general of Somaliland’s Ministry of Foreign Affairs and International Co-operation, but I bump into him buying a mobile phone – using the one he already has – in the clean but soulless Deero mall in downtown Hargeisa.

“It’s so inclusive, whether you are in a rural area or in the city,” he adds.

Mr Hersi is not wrong. From the road-side stalls hawking khat, a chewing leaf with mild narcotic properties which has found great popularity in Somaliland, to more high-end malls, cash is now a rarity.

Instead, buyers punch a string of numbers and a vendor code into their mobile and the money is transferred immediately. For now – with two main companies eDahab and Zaad controlling the market – there are no fees. Cash can quickly be withdrawn from, or added to, mobile accounts at specialised stores that dot the streets of Hargeisa.

With low literacy rates and just a handful of ATMs, Somalilanders are attracted to the simplicity of mobile money. Since it does not require a smartphone or internet access, even the most rudimentary mobiles can be used. It also eliminates the threat of theft that large quantities of cash carry in most cities.

But it is currency troubles that have spurred extraordinary growth in the technology in the past half-decade. According to the World Bank, 73 per cent of the adult population of Somalia – including Somaliland – relies on mobile money. But Musab Samir Mohamed, who peddles plates and duvets in the Home Centre in central Hargeisa, estimates that well over 90 per cent of his customers use digital payment instead of cash.

Since its introduction in 1994, the value of the Somaliland shilling has fallen every year. Previously the currency of choice for weapons smugglers as war raged in neighbouring Somalia and then opportunist politicians, who printed it with abandon to fund political campaigns, the shilling now trades at around 10,000 to the US dollar.

Its fluctuations are such that the Somaliland central bank texts the dollar exchange rate to all Somaliland-registered mobile phones every morning. The 500 and 1,000 shilling notes are the most common and $100 will set you back a million shillings.

“You can’t carry a million shillings in your hand,” says Mustafa Ali, who sells drinks, cigarettes and basic food products from the Rayaan corner shop in Hargeisa. “You would need a wheelbarrow.”

When a drought struck Somaliland two years ago, ripping through farming communities and destroying livelihoods, those living and working in cities and towns like Hargeisa and Berbera sent cash to their needy relatives.

And so extensive is its reach today that many receive their monthly salaries via Zaad or eDahab. The state’s minister of telecommunications, Abdiweli Abdilahi Suufi Jibriil, tells The National that government ministries have even used mobile money themselves, during particularly tough times for the Somaliland shilling.

“It is the main platform for payment in Somaliland,” he says. “It reduces the costs of transactions between people and allows rural areas to make a formal contribution to the economy.”

Naturally, there are concerns about the over-reliance on US dollars, which are traded on the platforms, and the growing power of Zaad and eDahab, which have monopolised the market and sidelined the country’s central bank. While Zaad is owned by Telesom, a telecommunications company based in Hargeisa, eDahab is owned by Dahabshiil, an international money transfer company based in Dubai.

Such fears, Mr Jibriil says, spurred governmental regulation, forcing people to use shillings for digital purchases worth less than $100, in order to fight inflation.

Although mobile money has been used in Somaliland for more than five years, larger African nations from Rwanda to Ghana have had their own dalliance with the technology. Most notable is Kenya – one of the continent’s largest economies where half the population regularly uses M-Pesa, a mobile money app.

Further afield, European nations including Estonia to Finland have already embraced mobile money, while cash payments in Sweden account for just 13 per cent of transactions.

Its impact is not always beneficial. A new economic crisis is gripping Zimbabwe, where the government has effectively printed billions of now worthless electronic dollars. Once again in Harare, shop shelves are bare.

But in Somaliland, with its small impoverished population and minuscule economy, mobile money has so far been a powerful force for good.

From the lively streets of Hargeisa to the republic’s arid countryside, Somaliland is not the obvious setting for a technological revolution. But its slow pioneering march towards a truly cashless society might just offer an example for the world.