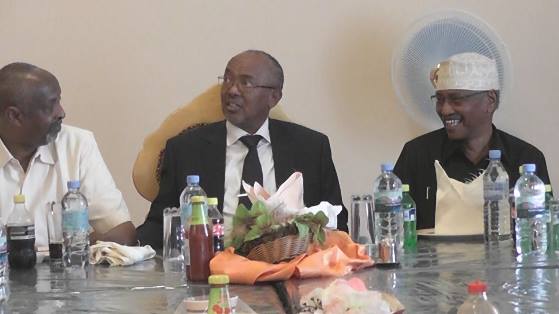 Somaliland authority has today hosted luncheon banquet in honor of the visit of former provincial administration of Puntland president Hon. Abdirahman Farole who is on personal tour to Hargeisa for the past ten days.

First Deputy Chairman of Somaliland ruling party, Mohamed Kahin has welcomed the former leader of Puntland to the luncheon.

Somaliland Deputy President, Saylici has made brief remarks during the luncheon banquet and has said that the lunch was made in honor of Farole and that SL gov’t officials should have the chance to pass their sincere condolences after the tragic death of his late wife in Garowe.

Ex-Puntland president, Mr. Abdirahman Farole has appreciated of the welcome and the gracious hospitality accorded to him during his visit to Hargeisa, SL capital.

He expressed his thanks and appreciations to SL government officials and the people for the warm welcome and hospitality that they provided to him.