Home frontpage Somalia’s elections: A small, stumbling step on the road to democracy 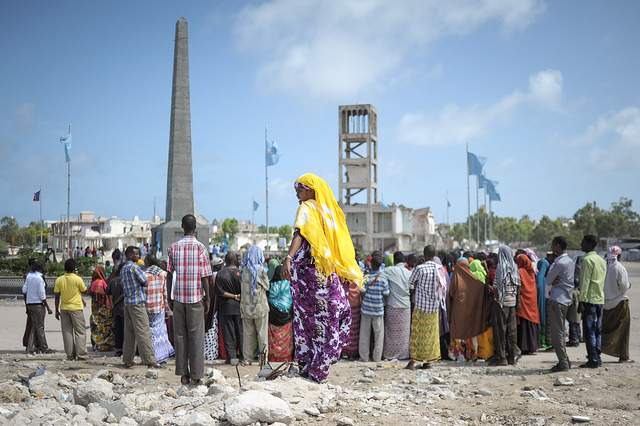 Somalia’s (s)election may have become a site for competing elites rather than competing visions. But the importance of the imperfect process should not be underestimated.

If all goes according to (the latest) plan, Somalia will hold parliamentary elections on 23 October, with the appointment of the president set for 30 November.

Whichever way it goes, this process will mark another turning point in the country’s long and troubled transition. If the election is deemed to be a failure, aspects of Somalia’s fragile progress may be at risk. If the selection is seen to go smoothly, the next question will be of whether the country can preserve its nascent institutions over the coming years and continue on the rocky road towards long-term stability, democratisation and development.

After years of being synonymous with state failure, famine, piracy and al-Shabaab, these elections provides a rare opportunity for Somalia to send a message of hope – though several concerns remain.

Reasons to be optimistic

The upcoming elections will not be a one-person-one-vote affair. But unlike 2012’s (s)election in which MPs were selected by just 135 clan elders, this time around the (s)electorate will be made up of 14,025 delegates.

These individuals will make up electoral colleges of 51 people each, which will cast secret ballots to select the Lower House’s 275 parliamentarians. One third of these seats will be contested only by women, and the distribution of the seats will reflect Somalia’s pre-existing 4.5 formula that divides power between clans.

A new Upper House will also see 54 senators elected, who will be nominated by regional leaders and approved by their respective parliaments. Members of both houses of parliament will then select the next president at the end of November.

Settling on this convoluted process was the culmination of months of fierce political negotiations and backdoor dealings. There had been some hope that this time around, there would be one-person-one-vote elections. But while the final process falls far short of this, those in diplomat circles that midwifed the model refer to it as representing “enhanced legitimacy”. That’s to say it is an improvement on the last time, but not universal suffrage just yet.

Indeed, the 2016 process can be seen as a quantum leap for a country that barely has functioning institutions, has weak electoral infrastructure, and has long lacked a culture of civic engagement or political participation. While still highly limited, the process is a significant advancement on 2012. Moreover, with the implementation of a federal system underway, candidates are having to campaign from their respective constituencies, rather than just from the capital Mogadishu.

[Somalia is still fragile, but fragile is progress]

This election has also sparked a whole new generation – mostly from diaspora – of Somalis aspiring to be MPs, senators or president. Countless political newcomers – both women and men – are posting campaign fliers and organising town-hall meetings, the kinds of baby-steps towards democracy that Somalia hasn’t seen for decades. In major cities like Mogadishu, Kismayo, Garoowe, Baido and Adaado, newly-designed campaign billboards have been put up as hundreds of volunteers and political brokers flock to these cities.

Furthermore, even though many of those running for the presidency are the usual suspects, the field is wide-open and full of diverse candidates from different clans and constituencies. More than 50 people have declared their candidacies, including two women.

It’s very possible to be overly optimistic, however. This 2016 process is still miles away from one-person-one-vote, it has plenty of inherent flaws, and it has shown itself to be open to manipulation and fraud.

To begin with, the way in which the elections have been organised gives incumbents an excessive amount of influence over what is largely an elite-driven exercise. The electoral process was agreed by the National Leadership Forum, a UN-backed framework whose key participants included the President, four presidents of federal member states, the Speaker of Parliament and Prime Minister. And because this forum was also involved in selecting the clan delegates who will be making the electoral decisions, many believe the process is already heavily skewed towards these incumbents.

The often slow and argumentative process has also been beset by disputes between competing leaders over nominations and other details as well as allegations of corruption, gerrymandering and intimidation. This recently led the elections to be delayed yet again, prompting the European Union to issue a stern statement, warning: “Any further delay would undermine the legitimacy of the institutions and the new timeline should not provide the space for manipulation and disruption by spoilers.” UN special representative for Somalia, Michael Keating, commented: “The renewed delay raises a number of fears. Let me name just two: that the process is being politically manipulated, and that this delay may only be one of yet further ‘rolling delays’.”

Indeed, in the run-up to the votes, federal member states and the central government in Mogadishu have continued to quarrel over clan representation in both houses of parliament and clashed over the control and supervision of the electoral process, further eroding trust. Meanwhile, the formation of Hiiraan & Middle Shabelle state – the last remaining federal member state still to be created – is becoming another source of ongoing contestation and political jockeying.

In many ways, rather than being an opportunity to present competing visions to the Somali people, the electoral campaign has become a site of elite contestation, especially between Prime Minister Omar Abdirashid Ali Sharmarke and President Hassan Sheikh Mohamoud, both of whom are running for the presidency and now working at cross purposes.

Adding to these worries is the fact that the credibility of the Federal Indirect Electoral Implementation Team (FIEIT), which is administering the elections, has been called into question by some observers who have raised concerns that the election will lack transparency and integrity. Delays are one thing, and acceptable within reason, but perceptions of a rigged process would undermine its legitimacy amongst the Somali people.

Although the Islamist militant group al-Shabaab is not the centre of attention in these elections, its threat to disrupt the process and attack traditional elders involved in the exercise also looms over proceedings. Partly because it has been on the back foot of late, al-Shabaab has re-centred its core messaging around the elections, describing the exercise as traitorous and un-Islamic. It has stepped up its high-profile attacks, particularly in Mogadishu, and shown its determination to undermine the elections as much as possible.

Somalia doesn’t have a tradition of smooth transfers of power. The last transitional election, just four years ago, was a remarkable moment for the country as the reins of government were handed over peacefully.

The current process’ many flaws and challenges are clear to see. But as it continues its long and tortuous transition, Somalia will be hoping the upcoming process will provide another highly imperfect but promising step forwards – especially as the success of this (s)election will largely determine whether the country can finally hold one-person-one-vote elections in 2020.

Abdihakim Ainte is a political analyst and consultant. He tweets at @AbdihakimAinte.