Home Daily Security Briefing Somalia’s Army Told Her to Sew a Skirt. Now She’s One of... 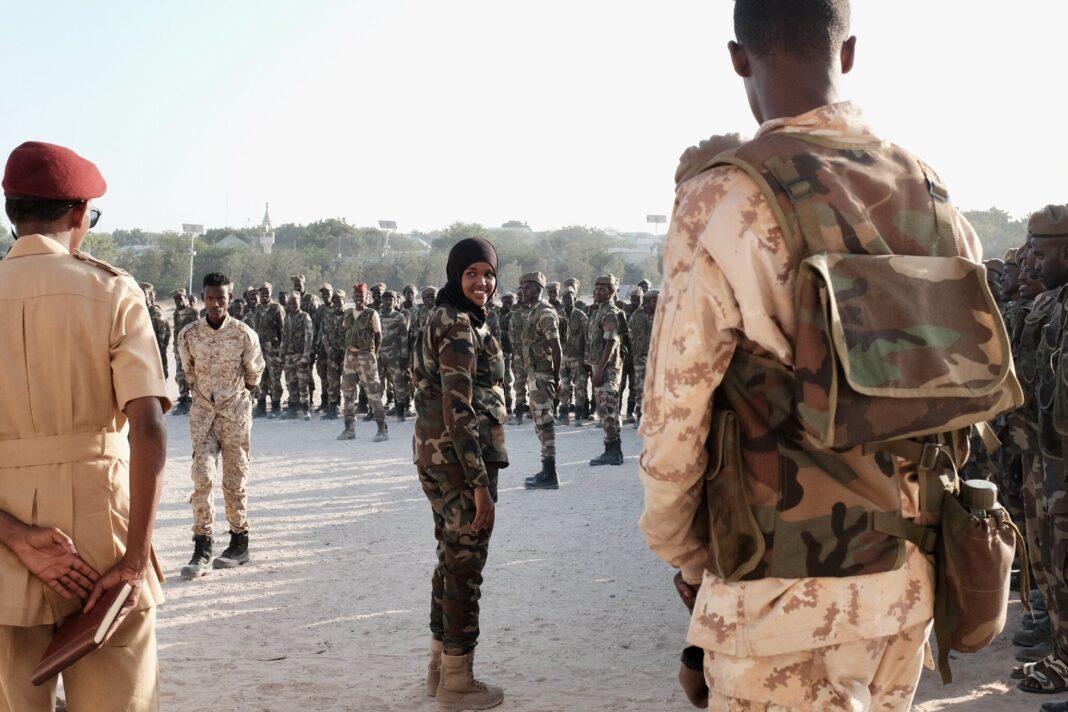 NAIROBI MOGADISHU (HAN) May 16. 2021. Public Diplomacy and Regional Stability Initiatives News. Monitoring Regional Issues.  When Iman Elman decided to enlist in the Somali National Army in 2011, the officer distributing uniforms gave her one shirt and two pairs of pants. Puzzled, Ms. Elman asked about the missing shirt. There was none, he said. The extra set of pants was provided for her to sew into a skirt.

Ms. Elman, who was born into a family of prominent peace and human rights activists in the Somali capital of Mogadishu but grew up in Canada, was 19 at the time and wanted to join the front lines in the country’s fight against the terror group Al Shabab. A skirt was not going to do, she thought, and politely declined the second pair of pants.

The incident, she said, served as a reminder not only of the challenges awaiting her in the patriarchal world of the Somali military but also of the traditional, conservative norms she would have to overcome.

“We still have a long way to go,” Ms. Elman remembered thinking at the time.

Almost a decade later, she is now Lt. Col. Elman, having risen from foot soldier and captain, and is in charge of the army’s planning and strategy — the only female department head and one of the highest ranking women in the Somali military.

As one of just 900 women in an army of 25,000, she is helping push for accountability and efficiency in a force that’s battling one of the deadliest terror outfits in the African continent. In a country where women remain marginalized politically, economically and socially, Colonel Elman is also working to deepen their role and help move them beyond the menial jobs many are confined to within the armed forces.

For decades, Somalia was mired in conflict and chaos, rived by clan warlords competing for power and saddled with a series of weak transitional governments. But Colonel Elman’s journey into the military began as the country’s civil war ebbed and a United Nations-backed government took control of the capital. In 2011, as waves of Somalis from the diaspora returned home, she visited Mogadishu and hatched the idea of joining the army. In discussions with soldiers, however, she was surprised by how quickly the male officers tried to discourage her, saying that she would be assigned only domestic roles like cooking and cleaning.

Their resistance only steeled her determination. “That was my driving force,” she said in a recent telephone interview from Mogadishu.

“A lot of it was me feeling the need in that moment to prove a point as to what a female can and cannot do,” she said. “Not only do I know that I shouldn’t be limited because of my gender, but I feel like I can do just as much if not more than any of the men.”Colonel Elman was born in Mogadishu on Dec. 10, 1991, when Somalia was beginning to disintegrate. Midway to the hospital for delivery, her mother, Fartuun Adan, and her father, Elman Ali Ahmed, decided it was too dangerous in their neighborhood to leave her two older sisters, Almaas and Ilwad, in the house. They went back and fetched the girls, not knowing that they would never be able to return.

As the war and the perils intensified, Ms. Adan and Mr. Elman decided the wisest course was to split: She would seek refuge abroad with their daughters while he stayed behind to continue their humanitarian work.

It was a brave decision, but ultimately a tragic one. On Mar. 9, 1996, Mr. Elman, who had popularized the slogan “Drop the gun, pick up the pen,” and who had set up an institute to rehabilitate former child soldiers, was fatally shot in Mogadishu.

By then, Ms. Adan had received refugee status in Canada and was raising their daughters in Ottawa. Colonel Elman said her mother not only reminded them of their roots but ingrained in them the notion that their gender should not limit their ambitions.

In 2006, with violence continuing in Somalia, Ms. Adan returned to Mogadishu to head the Elman Peace and Human Rights Center, an organization that is continuing the rights work of her husband. In 2010, she was joined by her daughter Ilwad, and the two have focused much of their efforts on women, children and vulnerable members of Somali society.

When in 2011, Colonel Elman, then a general arts student at University of Ottawa, opted to join the military, many were surprised that she was not following in her father’s footsteps. But she did not see a military career as contradictory to her father’s values and aspirations, she said.

“When people look at it, they do see the irony,” she said. “But the reality is that my father and I are both striving for the same thing. We are both working for peace.”

Her sister Ilwad — who was shortlisted for the 2019 Nobel Peace Prize — agrees, saying that while there’s “intentional division” between military solutions and civilian approaches, there’s “a lot of complementarity in the work that we do.”

Sometimes, when her sister comes back from the front lines, she said, she brings back child soldiers whom the center helps reintegrate into society.

Last November, the Elman family’s faith in rebuilding Somalia was shaken after Almaas was killed by an unknown assailant. Colonel Elman, who has lost close colleagues in the war and has survived three roadside bomb explosions and countless encounters with the Shabab, said she “broke down” after the shooting.

But after taking two weeks to mourn, “we realized that there was no turning back for us,” Colonel Elman said. “We don’t have that option because we have already sacrificed so much.”

The sisters said they were back at their jobs by the end of December.

For now, Colonel Elman is working on instituting and strengthening reforms aimed at creating an army that represents the true interests of the state instead of clan allegiances. She has also begun an effort to train army officers on human rights and sexual assault — something, she said, that was seen as “nearly impossible” to implement when she first suggested it to her superiors.

As the army’s chief planner, Colonel Elman is also working to improve the conditions of women in the army by instituting quotas in recruitment and training programs and creating an environment to encourage more women to sign up, including separate washing facilities and places to change clothes.

Colonel Elman said there is still a long way to go “in terms of changing the mind-set” of people in Somalia around women serving, or holding key positions, in the army.

“You are not exactly sure if the country is ready to have a female general,” she said. But no matter what, she said, “I am very proud of how far we’ve come, and even the small milestones that we have reached have been quite significant.”