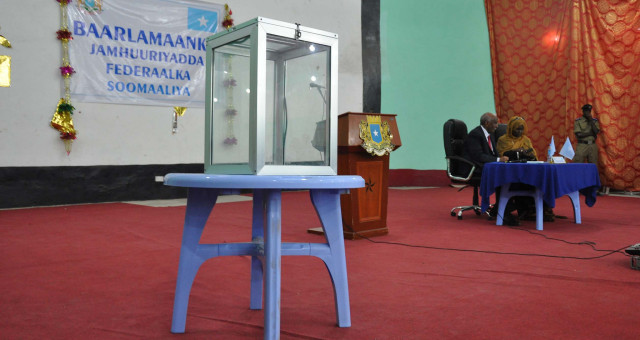 MOGADISHU (HAN) August 7.2016. Public Diplomacy & Regional Security News. A date has been announced by the National Leadership Forum for the Somali Federal Elections will Be on October 30th. The Election Commission in the implementation of today’s meeting held in Mogadishu today. Omar Abdullah said that the election of the Upper House Members from the established regional states will be on 24 September to 10 October of this year. Choosing the Parliament expires on October 25. The presidential election due no later then October 30th.

Finally, the Electoral Alternative request all government agencies, administration, community organizations, the international community to participate in the electoral process and prepare the facility, materials and Security 2016 election requires .

It is expected that the new Election Commission will submit a budget proposal to the SLF during the meeting of 2nd of August. There are already discrepancies of the required resources. SLF during their last meeting in Baidoa submitted a budget for the elections, but the international partners who are expected to underwrite the elections raised concern that the requested budget is too high.

It is not also clear whether the International partners will be able to cover all these expenses for the elections, as they are now talking on ways to generate resources by requesting candidates of MPs to pay around 5,000 US dollar to cover elections expenses.

For example if there are 5 candidates for every constituency, we are looking at a situation of 1375 candidates, which brings a total of $6,875,000 (six million eight hundred seventy five thousands). Even though this is a good way of raising resources, it is impossible to implement it for various reasons. One, it will limit the elections to only those who can afford it, at the same time encourages corruption. Many candidates with good programmes but less resources will be locked out.

The best option in such a scenario is for every selected MP to contribute to his or her first three months’ salary of 3,000 USD towards the electoral process. In other words, international partners giving loans to the process so that the new parliament will repay them as loans.

The task of transporting over 14,000 people from all regions of Somalia and accommodating them in various districts in the country will be costly. The security of these electors will also have resource implications

Candidates for MPs and the presidency will need a safe and secure environment to exercise democratic practices including freedom of movement, holding events, lobbying within constituency and safety for their own during this critical time.

There is an understanding that AMISOM and Somali Security forces will ensure the security of cities during election. It is easier for security forces to provide security in general, but it will be difficult to ensure the safety of everyone including constituency members that are electing MPs (14025) and candidates of MP seats (1375) as well as presidential candidates. Al-Shabaab has already threatened to people taking part the electoral process and warned them not to take part. Furthermore, there are strong signs that they are considering changing this threat and forcing Traditional leaders to choose constituency members from Al-Shabaab so that they can become MPs. This is a serious issues that need to be addressed immediately.
Security will not only be the responsibility of the government institutions, but every citizen as the legitimacy of the election process is for the interest of all. Since security institutions of regions will be responsible for the overall safety of other cities, they lack proper training and capacity.