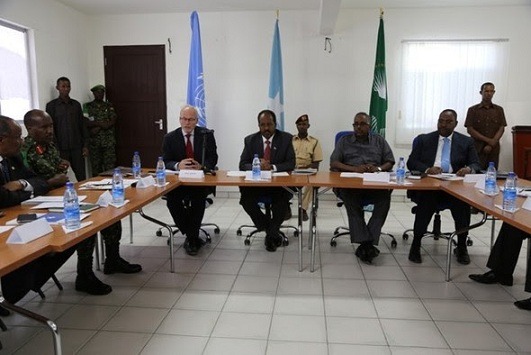 Mogadishu (HAN) May 10, 2014 -The Somalia president Hassan Sheikh had In a meeting with a European & international donors Ambassadors at Halane Compound in Mogadishu. The delegations updated and exchanged  views about the the New Deal Compact, Somali vision of 2016 and the Peace and State building Goals for Somalia.


The first High Level Partnership Forum (HLPF) executive meeting attended by more than 15 Ambassadors and international agency representatives, the Forum reviewed progress of the Federal Government of Somalia and the associated support of the international community in achieving activities outlined in the New Deal Compact, Vision 2016 and the Peace and State building Goals.

The HLPF oversees the implementation of the Somali Compact, which is the overarching platform to address Somalia’s peace- and state-building priorities between 2013 and 2016. The UN and international partners have committed to align their support in Somalia to the Somali Compact’s priorities in the areas of inclusive political dialogue; security; justice; economic foundations and revenue & services.

Speaking to the group, H.E. The President provided evidence that the Federal Government has delivered a wide range of agreed goals. Achievements presented include liberating three million people in 9 towns in 6 regions from the scourge of Al Shabaab. Development assistance support structures such as the Aid Coordination Unit and the Somali Development and Reconstruction facility have been established, to ensure that aid promised to Somalia is coordinated, delivered and monitored. To ensure transparency and better fiscal management, the Central Bank has been revitalised through the appointment of a new Governor, Deputy Governor and Board of Directors, and the Financial Governance Committee, which delivers financial oversight has been set up. Infrastructure progress includes 35 km of rehabilitated roads in Mogadishu, and flagship projects such as building District Headquarters, courts, police stations, hospitals and water wells have been started in Jowhar and Merca. The United Nations Multi-donor Trust Fund is operational with money beginning to flow to the Treasury, thus supporting the functioning of the Central Bank. Working groups for the five Peace and State building goals have been established and are in the process of identifying practical programs that will be delivered on the ground throughout Somalia. The plan to take Vision 2016 to the regions for consultation and discussion will be finished and consultation meetings will begin very soon.

The President said, “Somalia is meeting the targets for the New Deal. It was a pleasure to discuss our plans today with our friends in the international community and together reflect on what has been achieved all ready. All good things require planning and hard work to make them reality. We have spent many months finalising plans and strategies that are necessary to ensure that when we begin to deliver programs throughout Somalia that they are the right ones which will make the most difference.

“Sometimes progress is difficult to see- especially in the beginning- but we are looking forward to getting these programs ‘out in the sun’ where people can see that this government is working hard on their behalf.

“For example, we have been discussing setting up interim administrations for a long time. The reality is that the planning stage of anything is never very visible, but tomorrow, we begin training a group of 165 Caretaker Administrators so that they are equipped to begin the task of interim District Administration. These people will be living and working in communities; their work and their results will be visible,” the President said.

Speaking at the Forum, Special Representative of the UN Secretary General, Mr Nicholas Kay, said, “Today, the international community and HE The President have reconfirmed their mutual commitment to moving forward quickly, together. There are many things to do and the risk is too great to be distracted now.

“We agreed that we were not satisfied with the progress that had been achieved. We need to go further and faster. We agreed a set of important actions needed to be done in the coming six weeks by the Federal Government and international partners,” he added.

Concluding the Forum, HE The President confirmed the Government’s commitment to immediate action, “Today, we took stock of where we are and committed to six areas that require speedy resolution. These areas include: finalising the Vision 2016 consultation plan and beginning consultations; the establishment of the Federalism Commission, National Election Commission and Independent Constitutional Review Commission; forming interim district administrations and setting up Peace and Security committees in these areas; security of supply routes for providing food and other goods to restored areas; activating an adequate humanitarian response; delivering $3million for peace-building activities; and establishing the Independent Advisory Panel as part of the Financial Governance Strengthening Program to provide expert advice on major concessions and contracts of high value and high risk.

“We have an ambitious agenda ahead of us, and I look forward to working with my colleagues across all Somali institutions and our international friends to deliver results that build a better Somalia,” the President ended. Sources: Shador Haji Mohamud, Senior Press Officer, Mogadishu, Somalia