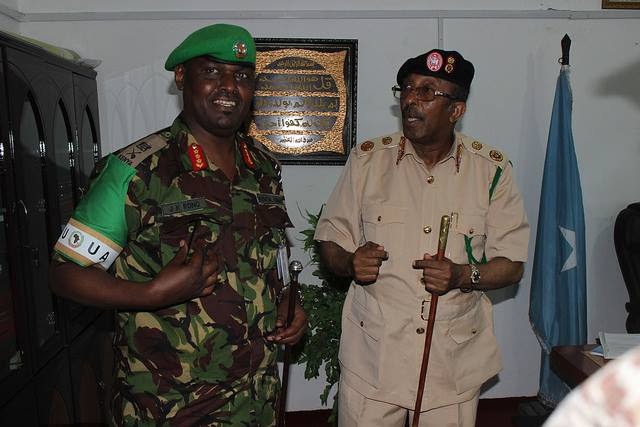 The meeting was also attended by the SNA Deputy Chief of Defence Forces Brigadier General Ali Bashe, among others. Lt. Gen. Rono hailed the good working relationship between the SNA and AMISOM, which he said has been critical to the success of operations against terror group, Al-Shabaab.“Our working relations with SNA are very good.

From the time operations started in all the sectors, we found that SNA are very keen, have good knowledge of the ground and critical networks of intelligence. In the major operations that we have conducted such as Operation Eagle, Operation Indian Ocean, we have worked together with SNA and we are grateful,” said Lt. Gen. Rono.

Maj. Gen. Mohamed Adan Ahmed, who assumed command of the Somali National Army in September this year, said he has embarked on a programme of reforms that will cover key areas that include: improving the military command and control for improved communication; capacity building through training; finance and personnel management; as well as better logistical support.

He reiterated his commitment to strengthening the partnership between the SNA and AMISOM, as both have a common goal of ensuring peace in Somalia.“We promise that we will cooperate, we will sit and plan together.

We are willing to work together and review together the Concept of Operations because we are all undertaking the same mission,” said Maj. Gen. Mohamed.As part of its mandate, AMISOM military extends support to the Somali National Army, through training and mentorship, further manifested through joint operations. source: Goobjoog News