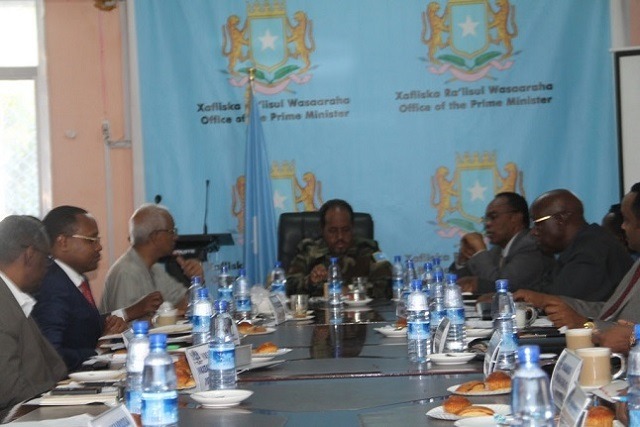 Mogadishu (HAN) June 15, 2015 – Public Diplomacy and Regional Safety and Security News – The president also spoke the political progress in the country and exuded confident that his Federal Government will deliver it is promises before its time expires. According to exclusive speech notes received by Geeska Afrika Online:

Speaking to the media in his office, the Somali President Hassan Sheikh Mohamoud urged the Somali people to unite as the country rise from the dust after two decades of civil war.

The President Started his Speech: I want to speak to you tonight about our effort in to empower political progress — the nature of our commitment to secure Somalia, the scope of international community interests, and the strategy that my government with its administration will pursue to bring this terror war against Al-Shabaab to a successful conclusion. It’s an extraordinary honor for me to visit Somali National Army (SNA) frontlines,  where so many men and women have prepared to stand up for our national security, and to represent what is finest about our beloved Somalia, for safety and security of Somali people, as well as to protect regional neighbours against terror threats.  These facts compel us to act along with our friends and allies. Our overarching goal remains the same: to disrupt, dismantle, and defeat Al-Shabaab in Somalia, and to prevent its capacity to threaten international maritime security, international commodity supplylines and our allies in the Horn of Africa.

This year, after extraordinary costs, with Allies, EU, USA and Somali National Army (SNA), we are bringing the terror war wagging by Al-Shabaab to a responsible end, in-order to stabilize Somali people’s security and their economic well-being.

To meet that goal, we will pursue the following objectives within Somalia. We must deny Al-Qaeda and its affiliates a safe haven inside Somalia. We must reverse the Al-Shabaab’s momentum and deny it the ability to overthrow the government. And we must use our assets and people to strengthen the capacity of Somalia’s National security forces, and government strategy, so that we can take lead responsibility all of us (Youth, Women, Business community and students) for Somalia’s future.

Now, let me be clear: None of this strategy will be easy. The common struggle against violent extremism and Al-Shabaab doctrine will not be finished quickly, and it extends well beyond Somalia and the region.
As history teaches us, we can’t count on Somali national army (SNA) might alone. We have to invest in our local security forces, because we can’t capture or kill every violent extremist in Somalia. We have to improve and better coordinate our Somali National intelligence networks, so that we stay one step ahead of Al-Shabaab shadowy networks in Somalia and in the region.

The Somali Federal Government with its allies will meet these objectives in three ways.

According to the presidential notes received by Geeska Afrika Online: These are the three core elements of our National security strategy: a military effort to create the conditions for a transition; a civilian surge that reinforces positive action; and an effective partnership with our International allies as well as Regional Somali Administrations.

The president said: I know that this decision asks even more of you — a military that, along with your families, has already borne the heaviest of all burdens. Since then, we’ve made progress on some important objectives. High-ranking Al-Shabaab and Al-Qaeda leaders have been killed, and we’ve stepped up the pressure on Al-Shabaab networks in Southern Somalia bases. In Southern Somalia, our Nation’s National Army with allies AMISOM will wage soon the largest offensive in months. In Somalia, we and our allies will prevent Al-Shabaab terror group to stop, the upcoming presidential election, and that election will produced a government that is consistent with Somalia’s laws and constitution.

Yet huge challenges remain. Somalia is not lost, but for three decades it has moved backwards, with terror, civil war and famine.

The president’s final statement said: In Somalia, I agree with our friends (UN, USA, EU and AU) and allies: we are passing through a time of great trial. And the message that we send in the midst of these storms must be clear: that our cause against international terrorist of Al-Shabaab is just, our resolve unwavering. Somali Government will go forward with the confidence that right makes might, and with the SNA commitment to forge a Somali people and Somalia that is safer, a regions that is more secure, and a future that represents not the deepest of fears but the highest of hopes throughout the cities, villages and the regions of Somalia.