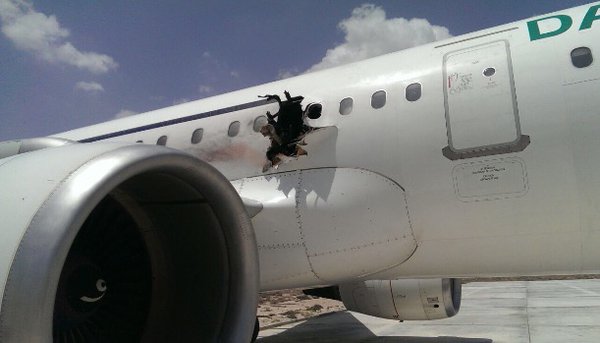 MOGADISHU (HAN) February 2, 2016 – Public Diplomacy and Regional Stability Initiatives News. A passenger jet made an emergency landing in Somalia’s capital when a fire broke out shortly after take off, with two people suffering minor injuries, an official said.

The Daallo Airlines plane returned to Mogadishu’s airport on Tuesday after a bang was heard on board and a fire erupted, Ali Ahmed Jama, Somalia’s minister of air transport and civil aviation, told reporters in the city. He said investigations are under way to discover the cause. The jet was bound for neighboring Djibouti. 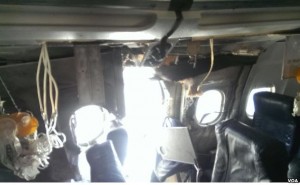 Voice of America’s Somali-language website published photos showing a large hole in the aircraft’s fuselage close to the right wing. The minister said there was damage to the plane’s wing and inside it.

Abdirahim Ahmed, a witness at the airport, said he saw fire on at least one of the plane’s wings when it landed. The aircraft was carrying about 60 passengers and crew who were evacuated, Mohamed Abdullahi, a police officer at the scene, said by phone.
Daallo Airlines, based in Dubai, flies regularly between Somalia’s capital and cities including Djibouti and Jeddah in Saudi Arabia, according to its website. The carrier will issue a statement later today, a person who answered the phone at the company’s executive offices said Tuesday.