Home frontpage Somalia: Michael Keating on Over a Mission that is in Good Shape 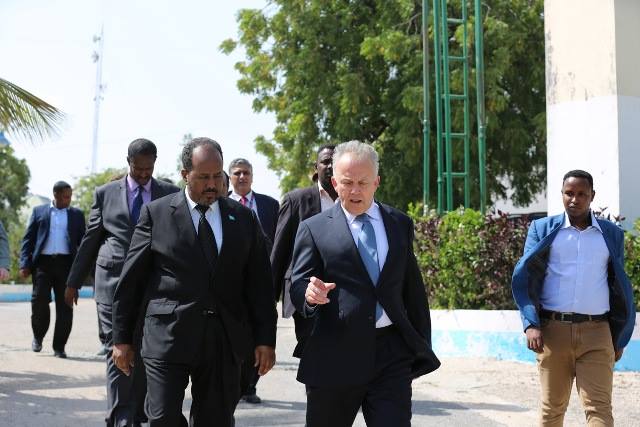 I am delighted to speak to you so early in my tenure. It is my pleasure to be briefing you alongside Ambassador Madeira who has been inpost since December 2015 – an old hand compared to me. Before I start, allow me to pay tribute to my predecessor, Nicholas Kay, who handed over a mission that is in good shape. All my interlocutors in Mogadishu – Somali and international, AU and UN – have stressed the critical role he and his team have played in the past two and a half years.

I would also like to pay tribute to the international community and to this Council, which has played a pivotal role on Somalia for several years. The unity of the Council is a fundamental requirement for progress in Somalia. I look forward to working closely with you.

Let me begin with some first impressions. I was lucky enough to spend some time inSomalia in my youth when Mogadishu was thriving, and again in the Nineties when it was in turmoil. My two weeks as SRSG have not been Somalia’s easiest — marked by tough political negotiations and marred by two horrific terroristattacks.

Yet, the Somalia I see today is closer to my childhood memory than the nightmare of the civil war. It is a country of enormous potential, of determined people and entrepreneurial spirit, with extraordinary natural resources, a privileged geographic location, a natural gateway. Somalis know their potential, and they will not be deterred from realising it.

In the wake of the terrible attacks at El Aade and Lido beach, their spirit is doubly impressive. I pay tribute to the bravery and dedication of AMISOM and its troops, and to the courage of the Somali people. Kenya has vowed not to be deterred by the attack against its soldiers. Equally, Somalis are neither cowed nor deflected from their goals by Al-Shabaab’s atrocities.

This is not to underestimate the challenges ahead. But as we enter a critical year for the country’s transformation, Somalia’s steady progress will continue. That will require Somali leadership and the sustained support of this Council.

Success in Somalia in 2016 will depend upon managing threats, notably those posed by Al-Shabaab, as well as seizing the opportunities that political progress will bring.

The security situation remains very challenging. The SRCC will say more. We owe a great debt to the courage and dedication of AMISOM soldiers. Somalia’s security requires a comprehensive approach. As the Secretary-General has indicated in his Plan of Action for Preventing Violent Extremism, a full spectrum approach. Our political, security, development and human rights efforts must proceed together.

Military and counterterrorism efforts need to be accompanied by stronger policing and rule of law. A priority must be to strengthen federal and regional capabilities within Somalia as a basis for a longer term transition plan for AMISOM. This needs to be complemented by work to strengthen institutions, generate jobs with the private sector and to reduce dependence upon humanitarian aid.

Security remains a paramount concern. Too many civilians and too many soldiers are dying. Al Shabab remains a potent threat. I am encouraged by the commitments made by President Mohamoud in September 2015 to security sector reform, including a comprehensive review of the sector, timely and adequate pay by electronic means, and transfer to a unified biometric registration system. UNSOM and its partners stand ready to support these important initiatives.

The Federal Government is currently developing a National Security Policy, which is urgently required. The establishment of a national security architecture must be complemented by the creation of clear police, justice and corrections models for Somalia in the context of federalism. I hope we see progress on this set of issues before the High Level Partnership Forum in Istanbul.

The humanitarian situation is very concerning, and the underlying causes of Somalia’s protracted crisis remain unresolved. Millions of children, women and elderly people are acutely vulnerable and in total some 4.9 million people,representing 40 percent of the total population, are in need of humanitarian assistance. Over 1.1 million remain internally displaced. Some 300,000 children under age 5 are acutely malnourished. Millions lack access to basic healthcare, water and sanitation.

The Somalia Humanitarian Country Team recently launched the humanitarian response plan for 2016 with a total requirement of $885 million to save lives, strengthen livelihoods, improve access to basic services and protect vulnerable groups, including by seeking durable solutions for the internally displaced. The overarching objective is both to meet pressing need, build resilience and reduce dependence on humanitarian aid. It needs to be generously supported.

All our efforts will be conditional upon getting the politics right. Last November, thousands of Somalis across the country, from all walks of life, took part in a national consultative forum. This signalled a decisive step towards democracy: transparent and inclusive consultations on an electoral model for 2016, with the active participation of women, youth andminorities.

The ‘Mogadishu Declaration’ of 16 December outlined key principles, including on term limits, the quality of the electoral process and the participation andrepresentation of women and youth.

It gives me particular pleasure to share some breaking news with you. This morning, a decision was taken by the Somali Cabinet on the electoral model to be used later this year. This is the culmination of almost six months intense consultations. It may be a watershed moment, marking thegrowing political maturity of a federal Somalia. The Federal Government hastaken a bold decision. Leaders of the Somali regions, while many differences and concerns remain, recognise its importance and as I speak are engaged ondiscussions around its implementation.

Reaching a decision on the electoral model was not easy. Following repeated rounds of consultations among Somali leaders, in Kismaayo and in Mogadishu, and prolonged deadlock, the leaders of the Federal Government recognised that the national interest demands forward momentum. The model envisages that a Lower House of 275 members, based on maintenance of the 4.5 power-sharing formula between the clans, and an Upper House of 54 members, based on equal representation of the existing, emerging and prospective federal member states and the allocation of additional seats to the pre-existing entities of Puntland and Somaliland.

The decision marks an important milestone for Somalia, the Federal Government, and the leaders of federal member states. There are many more ahead. The journey will be long and bumpy. Much work remains to be done on the details related to the implementation of the electoral model and to ensure agreement of a political roadmap for the period from 2016 to 2020, to deliver universal elections by 2020. We must navigate around potential obstacles and obstructions along the way. Spoiler behaviour must be contained. And we must be ready to provide assistance to federal and regional leaders.

Real momentum could – should – result from the breakthrough that has been achieved today. This could spur other critical political processes. I welcome the launch of the state formation process in Hiraan and Middle Shabelle on 12 January. Once that process is finished – and the status of Mogadishu/Benadir is clarified – the map of the new, federal Somalia will be complete. Progress has also been made in recent months on the review of the Provisional Federal Constitution. A technical review of ten of its fifteen chapters has been completed, and themajor political issues to be addressed are now much clearer.

The federalisation process must not be just a top-down, mechanical exercise: to succeed in the long term, it must be an endeavour in which all the people of Somalia have a real stake. There is much left to do to ensure reconciliation and unity. It concerns me that freedom of expression and opinion has been challenged in recent months, and I call upon the Somali authorities to respect this freedom.

Ambassador Madeira and I are looking forward to strengthening and deepening the working relationship between the UN and the AU on the ground. In line with Resolution 2245 we will convene a Senior Leadership Coordination Forum between UNSOM, AMISOM and UNSOS to discuss our strategic and operational priorities. We are committed to taking full advantage of the creation of UNSOS, and the opportunities that affords for greater coherence and effectiveness.

We share a commitment to implementation of the Human Rights Due Diligence Policy, which remains an important tool to promote respect for human rights and ensure accountability in a volatile military context. For its objectives to be met, a strong working partnership with AMISOM as well as the individual troop contributing countries is essential, including to follow up on allegations and ensure accountability. This is in all our interests. Human rights violations will erode the population’s support for AMISOM, and for the Somali Government.

As I have outlined here, the challenges ahead are manifold. In the coming months I will work with Somali leaders, civil society, and the international community to support a comprehensive approach embracing political, security, development, and human rights priorities.

The exciting thing is that increasingly politics is displacing violence as a means of resolving differences among Somalis. There is an eager desire to advance and leave the suffering and divisions of the past behind.

Let me conclude by saying that unity of the Security Council and the coherence of the broader international community provides a powerful basis for the UN and our AU partners, to make a decisive contribution to Somalia’s future. You have my commitment and that of the entire UN team that we will support the leaders and people of Somalia to realise their goal of a peaceful, prosperous and democratic future.

I hope to achieve more before the HLPF in Istanbul at the end of February.