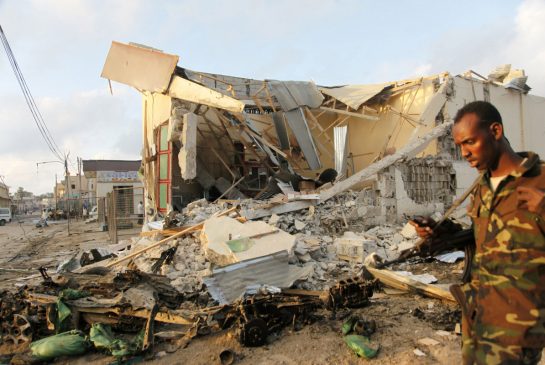 MOGADISHU (HAN) February 28, 2016 – Public Diplomacy and Regional Stability Initiatives News.  Somalia’s al Shabaab Islamist group bombed a busy junction and a nearby restaurant on Sunday in the town of Baidoa, killing at least 17 people, a police officer and the group said.

Al Shabaab often carries out such suicide attacks in the capital and elsewhere in its bid to topple Somalia’s Western- backed government. The group wants to impose its strict version of Islamic rule in the Horn of Africa nation.

“The restaurant and the junction were very busy and the death toll may rise,” Police Major Bilow Nurr told Reuters from Baidoa, which lies about 245 km northwest of Mogadishu.

A police officer said a suicide car bomb blew up at the junction while a second blast – possibly a bomb that had been planted or a suicide bomber – struck the restaurant.

Ismail Olad told Reuters the two locations were full of civilians and security forces. “I heard a huge crash at the busy junction and as I ran, I heard another blast at a restaurant ahead of me. The whole place was covered by smoke,” he said.

The blasts follows a car bomb attack in Mogadishu near a park and hotel on Friday that killed 14 people, police said. He said three militants from the al Shabaab group were also killed.

by Abdi Sheikh and Feisal Omar in Mogadishu