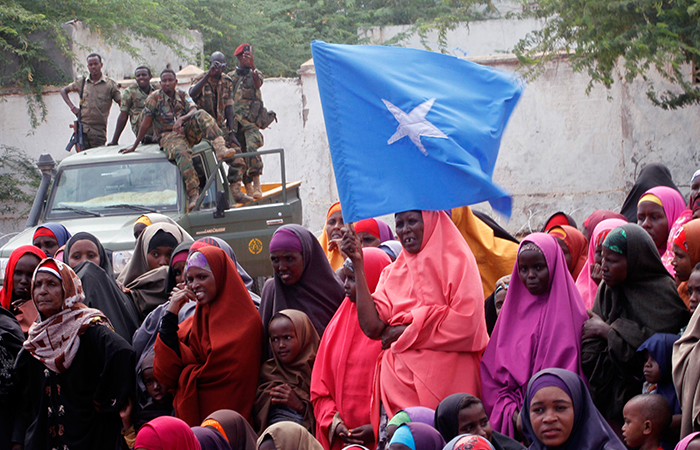 Rome (HAN)  (HAN) May 5. 2016. Public Diplomacy & Regional Security News.BY: Valentino De Bernardis. Translated by HAN & Geeska Afrika Online. A bet to win at any cost, where you play all out, with no secondary influence of possible beneficiaries and not the rich stakes.

This is in a nutshell what is happening in Somalia for the past twenty five years apart. The Somali political class was indeed forced to take the motion against a difficult path for the reconstruction of a credible state apparatus, in one of the countries precursors of what would later be called failed state, which then it would be followed by others. Each with its own peculiarities, lax under the gaze of the international community. Reality in which control and public administration in large parts of the territory is the prerogative of local groups in opposition to the central government, which not only do not recognize the mandate, but is committed to fight. A risky gamble that will accompany the Somali institutions in view of the next elections for the renewal of the presidency of the republic and the parliament, scheduled for August 2016.

To give the official announcement was, Monday, April 25, the current president Hassan Sheikh Mohamud during a visit to Addis Ababa. A decision in line with the requirements of the Provisional Federal Constitution of Somalia, which provides for the completion of the mandates of the two organs for August and September 2016, and already widely promoted by almost all the parliamentary arc Somali forces in the last year.

a worry is essentially the degree of security in the country, which will endanger the turnout of large portions of the population, not to mention the danger of attacks in symbolic defiance of the democratically elected institutional positions (in 2012 the first day of the presidency was Mohamud marred by a suicide attack at the Jazeera hotel Palace, immediately claimed by the Islamist militia al-Shabaab).

at the moment the fear attacks do not seem to have stopped the underground maneuvers of parties seeking new alliances to ensure the election victory. As proof of this, in the same day on Monday Prime Minister Omar Abdirashid Ali Sharmarke was ousted from office the Minister of Information and Telecommunications Hussein Guled Kassim entrusting the ministry to Jama Mohamed Mursal, without specifying the reasons. The shortage of motives and the timing of the change in the running in a primary importance monastery lets assume the presence of a specific political project. Behind the political sacrifice of Kassim may lie the will of the government in office to seek a bridge with Ahmed Mohamed Islam, president of dell’Oltregiuba State, delicate border area in the south of the country, to which the new minister is very close Mural .

If you terminate the policy considerations here on summer elections, far more troubling they are those which concern in the face of internal security. On the day of April 25, an armed terrorist group affiliated to the Islamic State of Iraq has claimed responsibility for an attack on soldiers of the African Union’s multilateral force engaged in the operation of peacekeeping in Somalia. It would be the first armed action of the SI in the Horn of Africa, a demonstrative act, but from the large symbolic value. The IS would seem in fact stand in contradiction to al-Shabaab near what remains of al-Qaeda, which wants to oust (or incorporate) from the guide of the Islamic armed groups not only in the region but throughout the Muslim world. A competition in which the West should watch closely, as a possible assertion of the SI in the Horn would mean a quantum leap (negative) of Islamist terrorism. Recognition at the state model exportable and globally, as is trying to do to other longitudes of the African continent (see Libya, another example of a failed state.)

To facilitate the intentions of the IS a social-economic fabric weak, with unemployment rates youth that is around 70% and a very low rate of schooling, where it’s easy to find new followers. Especially among young people who have supported (and not only in name) al-Shabaab in the past. A double danger because in the case of total affirmation of the SI to suffer would be not only the internal stability of all neighboring countries to the Mogadishu government (in the first instance Ethiopia and Kenya), but also the economic interests of the US and Europe, which over the years they have poured important economic flows, both in terms of humanitarian aid and investments. Not to mention the strategic importance of the area, where it passes one of the most important trade routes in the world.

It remains to be hoped that the Somalis do not lose the most important challenge of their (and our) life. Sources : notiziegeopolitiche.net

The views expressed in this article are personal capacity