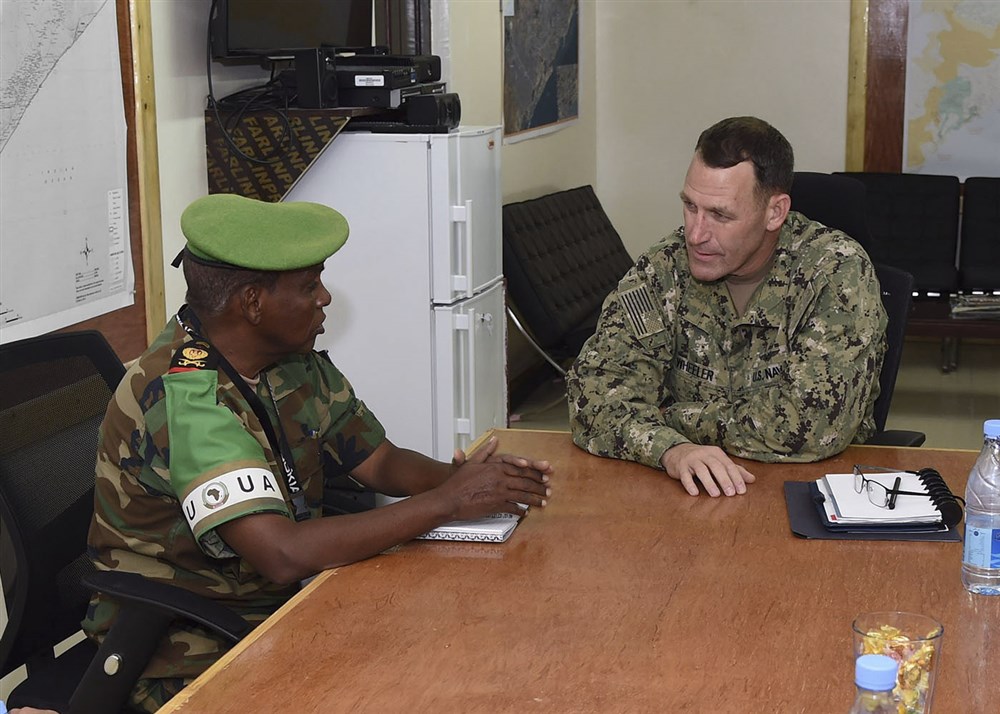 “We liberated many towns, many villages, we trained the Somali National Army,” Soubagleh said while listing the successes he’s seen with AMISOM. “We’re still progressing.”

CJTF-HOA leadership and Soubagleh were able to discuss security situations, AMISOM challenges, and the current dynamics seen by both sides.

“We work closely together and we need to keep our dialogue going to understand how, in this case, Gen. Soubagleh sees the situation,” said Scott Ticknor, Policy Advisor for the Commander of CJTF-HOA. “It’s mutually beneficial to have a chance to compare notes and I think it was a very useful meeting.”

Soubagleh expressed his satisfaction with the current AMISOM and CJTF-HOA relationship.

Ticknor also spoke to the timeliness of these conversations due to the encroaching Somalian elections occurring at the end of this month.

“It’s a key time to get a sense of what the security situation is going to look like, and I feel like we did do that,” said Ticknor.

Leaders had another opportunity to assess and discuss Somali security during the Defense Steering Committee meeting. The venue gave those involved with the defense of Somalia a chance to congregate and discuss plans and challenges.

Col. Søren Knudsen, Military Advisor to the Royal Danish Embassy and Defense Attaché Kenya, Nairobi, found the Defense Steering Committee meeting to have helped address some of the challenges of communication and coordination of the many defense efforts being employed in Somalia.

“A positive result indeed is to start seeing things moving,” said Knudsen. “It is a slow move, but it is a move.”

Ticknor explained that the main purpose of the defense steering committee meeting was to raise the level of dialogue, exchange information about how we see the security environment, and to agree on certain processes for moving forward with the committee.

“We’re all headed in the same direction, which is a better Somalia, better future,” Said Ticknor.