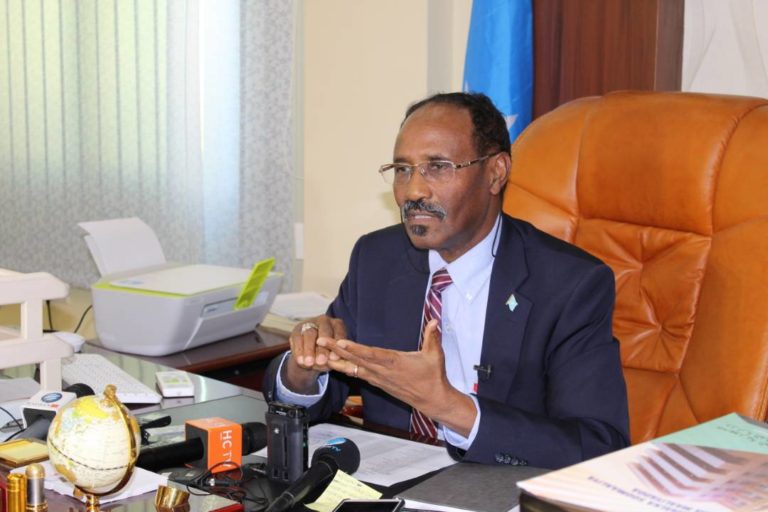 MOGADISHU MOGADISHU (HAN) May 15. 2021. Public Diplomacy and Regional Stability Initiatives News. Monitoring Regional Issues. : The Federal Government has disputed allegations by HirShabelle state that it was withholding millions of donor funds amid the ongoing floods which have claimed several lives in the region.

Finance Minister Abdirahman Beileh said in a statement Friday the government had not withheld­ funding meant for disaster mitigation in HirShabelle but instead noted contracting for the floods prevention project was underway.

“The Finance Ministry dismisses any (claims of) suspension of funds allocated for HirShabelle state.  The project will be implemented as per SCRP,” the minister said.

According to the minister, the project began assessing the need for flood protection on the Shabelle and Juba rivers on 27 March 2021. Action planning was carried out jointly by the Disaster Recovery Project (SCRP) and HirShabelle government, Beileh said.

The minister noted that 44 companies; 19 from Beletweyne and 25 from Jowhar have been selected and will be working on the 71 floods sites identified during the assessment.

Former HirShabelle President Mohamed Waare claimed last week the Federal Government had refused to release $35 million meant for disaster mitigation in HirShabelle state. According to Waare, the funds were donated by the World Bank, Italy, EU and Sweden.

But in his response Friday, Beileh urged HirShabelle to ‘provide evidence on allegations that the central government has withheld funds for flood relief in Hirshabelle.’