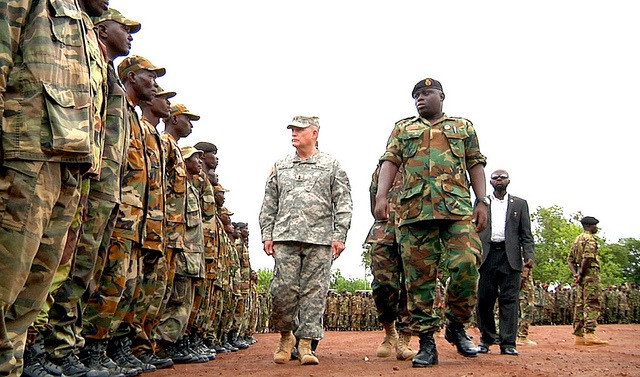 MOGADISHU (HAN) October 19, 2015 – Public Diplomacy and Regional Investment Initiative News. The European Union has committed €165 million in additional funding to support the African Union’s fight to ‘liberate’ Somalia from Al Shabaab fighters.Officials of the two regional institutions, the Commission of the African Union (AU) and the European Union (EU), signed the deal on Monday.

The overall objective of this financial support is to enable AMISOM to contribute to the stabilisation of the security situation in Somalia. The funding will be provided under the Africa Peace Facility (APF) established by the EU at the request of their African counterparts. AU’s troops, AMISOM, are currently fighting Al Shabab extremists in Somalia. Early this year, Somalia’s federal government and African Union troops (AMISOM) jointly launched a number of offensives seeking to weed out the militants in southern Somalia’s Bay region. The coalition forces pushed Al Shabaab out of several key areas, including Diinsoor town, which served as the group’s financial and military base for seven years. “This financial support package will enable AMISOM to continue its commendable efforts to complete the liberation and stabilisation of Somalia, in line with its AU and UN mandate,” Ambassador Smail Chergui, AU’s commissioner for peace and security, said after signing the deal.

The fund will cover AMISOM’s budget for troop and police allowances and death and disability compensation for military and police personnel, the African Union said in a statement released late Monday.  The fund will also be used to cover operational costs of maintenance, running costs and equipment for the AMISOM Al Jazeera training camp in Mogadishu. “[The] overall objective of this financial support is to enable AMISOM to contribute to the stabilisation of the security situation in Somalia,” Klaus Rudischhauser, an official of the EU said. The EU has been one of AMISOM’s main donors since the mission was deployed in 2007. The agreement is the 14th of its kind to be signed between the AU and the EU. theafricareport