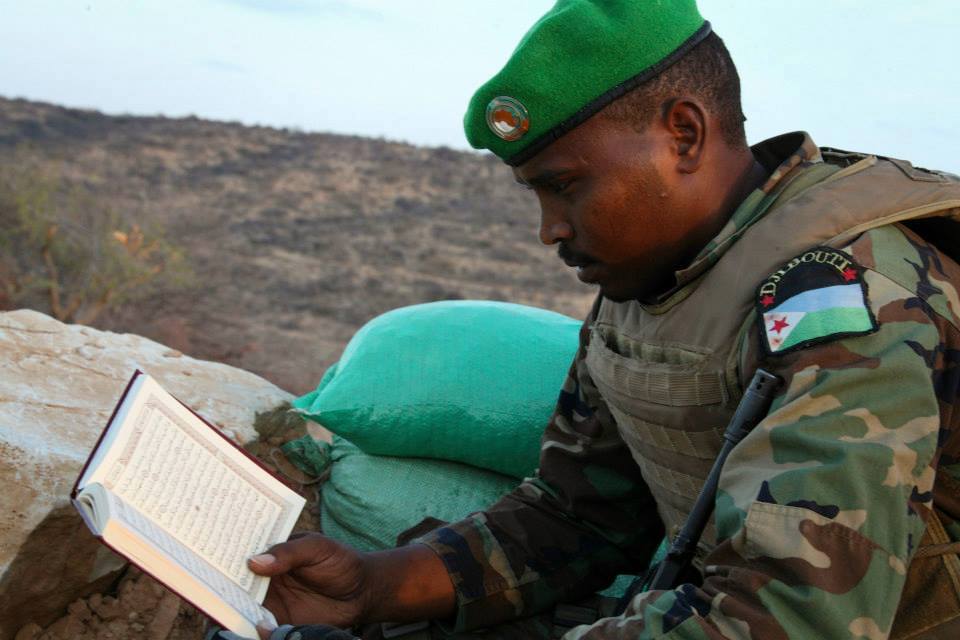 Mogadishu (HAN) March 19, 2014 – AMISOM officers and soldiers stand near the bodies of Al-Shabaab fighters who were killed during a military operation in Bulo-Burde and Djibouti Soldiers read a Quran verses for AMISOM soldiers targeted by Al-Shabaab.  Eye Witnesses told reporters the car blast at the hotel happened around early morning and the face to face deadly fighting went on until  seven clock, Hiiraan time. The militant  Al-Shabab’s targeting, lethality and sophisticated planning demonstrate al-Shabaab’s reach, determination, and capabilities – according to HAN & Geeska Afrika online security correspondat in Mogadishu.

Col. hamud of Djibouti, said three Djiboutian soldiers and three Somali soldiers, including Col Mohamud Amin – the military commander of the Somali National Army – Hiiraan division who was leading the offensive in the central region – were killed.

Djibouti and Amsion Spokesman Col Humad denied there were casualties when an Amisom convoy was attacked near its base in Arbiska (Carbiska) outside the capital of Mogadishu.

Al-Shabab had released online statement saying that seven Burundian peacekeepers and five American nationals travelling in the vehicles (With Amisom Forces) were killed on Monday afternoon. But, the the cheif of Somali national army (SNA) Gen.Dahir Aden Elmi denied.