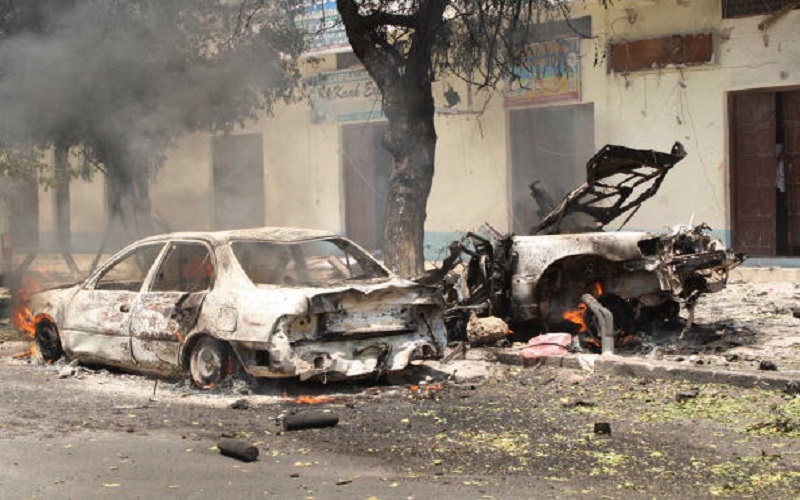 The armed group quickly claimed responsibility for the assault on the headquarters ofSomalia’s Criminal Investigation Department (CID) in Mogadishu on Sunday.

It was the second major operation in the city this week by the fighters, who have keptup their guerilla war on the Western-backed government in the face of US dronestrikes and African peacekeeping forces.

Heavy gunfire rang out inside for about half an hour after the first blast, saidwitnesses.

The bodies of four civilians lay in the street near the compound which was partiallydestroyed. A kiosk near the wall caught fire.

Witness Mohamed Abdi told the DPA news agency: “I saw a vehicle [driving] into thegates of the Criminal Investigation Department at a high speed and then a huge blastwent off.”

Somalia’s Internal Security Minister, Abdirizak Mohamed, tweeted: “After 2explosions 3 AS attackers who tried to enter the CID were killed, no casualties on ourforces, will update you on civilian casualties”.

In al Shabab’s first attack this week, 13 people were killed when two car bombs wentoff at the gate of the African Union’s main peacekeeper’s base on Tuesday.

Security analysts had warned that the group could step up its attacks, takingadvantage of the distraction caused by campaigning for a presidential election due inAugust.

Al-Shabab, seeking to impose power, has also launched attacks in Kenya and Uganda,which have contributed troops to the African Union peacekeeping force.

“Last week, al-Shabab used a former member of parliament as a suicide bomber,” saidAl Jazeera’s Mohammed Adow. “Al-Shabab want to prove they are not just targetingand radicalising children, they are also targeting the so called cream of society.”

He added: “People have lost hope in the current government [for a lack of security].”