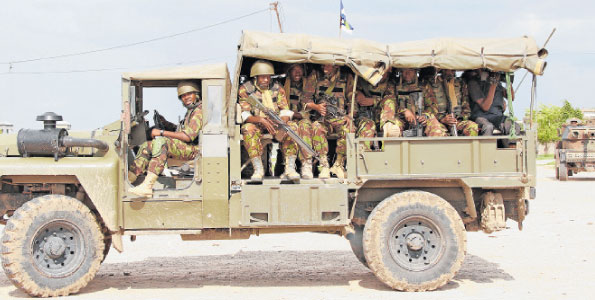 MOGADISHU (HAN) February 18, 2016 – Public Diplomacy and Regional Stability Initiatives News. Kenya’s army said Thursday it had killed the intelligence chief of the Al Shabaab insurgents and 10 other commanders in an air strike in Somalia.

The US government had placed a $5 million bounty on the head of spy chief Mahad Karate, with Kenya celebrating what it called a “major blow” to the Al-Qaeda-linked group.

Kenyan troops, part of an African Union force in Somalia (Amisom) fighting the insurgents, said they had killed Karate, a top commander also responsible for internal security, in an air strike at a militants training camp earlier this month.

Karate — head of the Shabaab’s Amniyat unit, a special security wing responsible for intelligence, attacks and assassinations — is said to have been involved in plotting the 2015 massacre of 148 people at Garissa university in northeastern Kenya.

“The killing… is a major blow to the terrorist group,” army spokesman David Obonyo said in a statement.

“The Kenya Defence Forces, under AMISOM operations, would like to confirm that Mahad Mohammed Karate… and 10 other middle level commanders were killed in a major KDF strike,” in southern Somalia on February 8, Obonyo said.

The 10-day delay in announcing Karate’s death suggests thorough efforts to identify the remains were carried out.

Karate was at a Shabaab training camp to “preside over the passing out of an estimated 80 Amniyat recruits who had completed their training, and were due for deployment to carry out more terrorist attacks,” Obonyo said.

“It is confirmed that 42 recruits were also killed while many others sustained injuries.”

Karate was put on the US State Department’s wanted terrorist list in April 2015 after the Garissa attack, which followed the 2013 attack in the Kenyan capital when Al Shabaab gunmen slaughtered at least 67 people at Nairobi’s Westgate Mall.

“Karate, also known as Abdirahman Mohamed Warsame, played a key role in the Amniyat, the wing of the Al Shabaab responsible for assassinations and the April 2, 2015 attack on Garissa University College,” said the US Rewards for Justice wanted notice.

“The Al Shabaab’s intelligence wing is involved in the execution of suicide attacks and assassinations in Somalia, Kenya and other countries in the region, and provides logistics and support for Al Shabaab terrorist operations throughout the Horn of Africa,” it added.

Karate was also the deputy of former Al Shabaab leader Ahmed Godane, killed in a US drone strike in September 2014.

Security sources believed Karate to be a key advocate of switching allegiance from Al-Qaeda to Islamic State, an ongoing and bloody debate within the militant group.
His death could strengthen leader Ahmed Diriye’s efforts to remain part of Al-Qaeda.

Last month the insurgents stormed a Kenyan army base at El-Adde in southwest Somalia, in the latest incident of an Amisom base being overrun by the group.

“It is believed that Karate played a major role in the recent attack on KDF troops in El-Adde by the deployment of his suicide bombers,” Obonyo said, adding that operations against the Al Shabaab “will continue until justice is done”.

Al Shabaab is fighting to overthrow the internationally-backed government in Mogadishu, which is protected by 22,000 African Union troops.

Kenyan officials have given no death toll from the storming of its base, but many suspect it to have been the country’s worst military disaster.

At the time, President Uhuru Kenyatta vowed revenge saying the Al Shabaab would “have no time to breathe.”