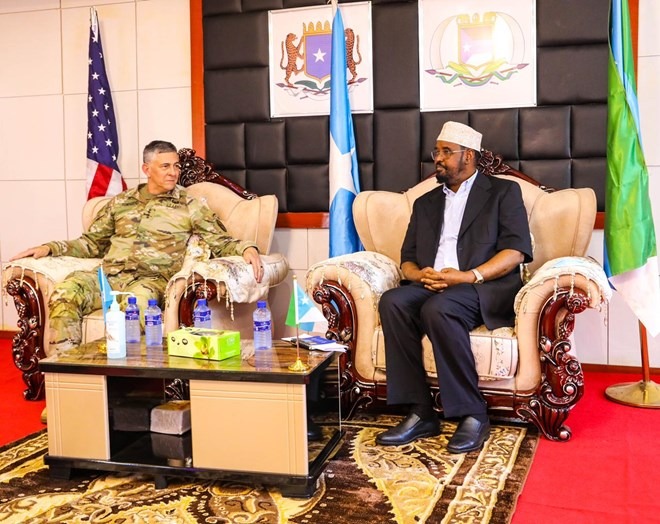 Mogadishu (HAN) May 16. 2021. Public Diplomacy and Regional Stability Initiatives News. Monitoring Regional Issues.  The Commander of the United States Africa Command (AFRICOM) met with the state President of Jubaland on Saturday in the regional capital of Kismayo.

Madobe said that they worked on collaborative efforts to push out the group from Jubaland.

“Had a fruitful discussion with Africom commandeer Gen. Stephen Townsend today when he visited Kismayo. Discussions focused cooperation on the fight against Shabaab and how we can  expand efforts to eradicate terror threats to the region.”

In one of his final acts as President, Donald Trump ordered a complete withdrawal of U.S. troops from Somalia. The roughly 700 troops were relocated to U.S. bases in Djibouti and Kenya.

Townsend told the Committee on Armed Services last month that the hasty withdrawal “introduced new layers of complexity and risk” and hindered their ability to conduct counterterrorism operations.

Africom completed its first engagement into Somalia since its departure in early February. During the exercise, American soldiers trained Somalia’s Danab forced on combat skills and operational planning.

During the same hearing, the four-star general also told the senate committee that political dysfunction had overtaken Al-Shabaab as the chief security concern in Somalia.

“The biggest impact to security in Somalia right now is less Al-Shabaab and moreso the political dysfunction that exists between the federal government of Somalia and the federal member states. As you mentioned in your opening remarks, the extra-constitutional extension of the president’s term in office — that’s our biggest challenge, I think, right now.”

It is unclear if Townsend and Madobe discussed the political crisis that nearly threw Somalia into a tailspin in late April.