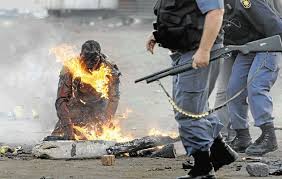 Mogadishu (HAN) April 17, 2015 – Public Diplomacy, Regional humanitarian Security News. Xenophobic Attack in South Africa against black African Migrants. A group of migrants, including a child, are rounded up and burned alive. Malawi says it will repatriate its nationals from South Africa.

Now that we see the treatment of Somali refugees in South Africa and it leads one to believe otherwise.

Is this what Mandela spent 27 years in prison for?

By: Mohamud Shalab: The Forgotten the Apartheid System Victimizes Somalis in South Africa

It seems all over the world there’s been uproar of violence against Somalis. In South Africa there were reported cases of heinous crimes where, too often, a Somali was the victim. Most recent in the news was an attack on a male in his twenties. A business owner living in Port Elizabeth, South Africa was attacked by a mob of South Africans along with his brother and sister. Though his brother and sister escaped, the mob caught up to him and took turns repeatedly dropping heavy rocks onto his head and body while kicking him with extreme force. The young male inevitably succumbed to his wounds. This type of violence is not something you would expect to see in any civilized nation. It is preposterous that a country would allow refugees in only to have them treated like nothing less than animals. It all seems very counterproductive since the reason they left their homeland in the first place was to avoid such violence. The most barbaric of crimes are being committed. Women are rape victims, men are being slain and

These individuals emigrated due to several life threatening push factors. But what happens when these threats follow you into your place of refuge?

Saudi Arabia and Yemen are committing all kinds of inhuman acts against Somalis as well. It is even more disheartening to see people of the same faith not providing aid to one another. As Muslims we believe in peace, stability, coexistence and unity, as we are one people. Giving Zakāt (charity) is one of the five pillars of Islam, so why is it that we cannot get help from our Muslim brothers and sisters? Somali immigrants are often mistreated, raped, and abused on the border of Saudi Arabia by Saudi and Yemeni forces. These immigrants are said to be ‘illegal’ however that shouldn’t sufficiently justify murder and rape. Countries of the Islamic faith should be the first ones offering shelter, not killing or raping the ones in need of it.

While expectations of our Muslim brothers and sisters are dwindling, hope for a better life is restored in North America and Europe. In these exceptional countries you can find equal security and protection under the rule of law. It seems refuge is found where you least expect it to be. In these western countries equality is held at appropriate standards. Children are given a proper elementary education and a chance for post secondary education as well. Adults have job opportunities and government aid if it’s required. There are shelters for the homeless or people who are new to the country as well.