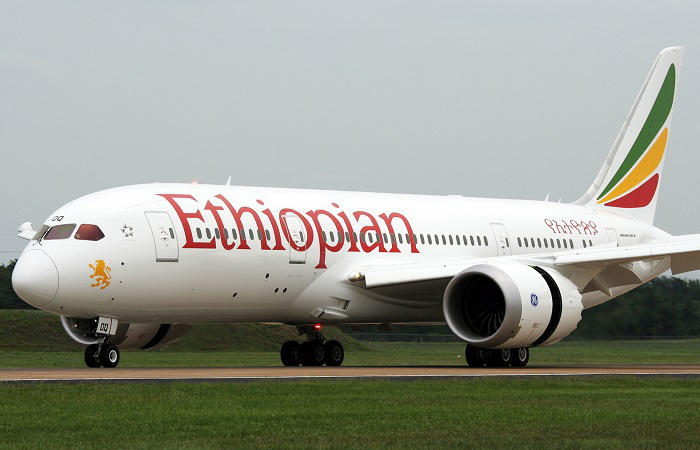 Share on Facebook
Tweet on Twitter
ADDIS ABABA (HAN) AUGUST 08.2018. Public Diplomacy & Regional Security News. By ANDUALEM SISAY. Ethiopian Airlines should be co-owned by African governments, suggested its Group chief executive Mr Tewolde Gebremariam on Friday. Commenting on the recently announced privatisation plan by the government for the national carrier, Mr Tewolde said it “would be good if African countries such as Nigeria have a share in the company”. Addis Ababa is seeking to open up its economy by selling a stake in some of its state-run enterprises such as the airline. Mr Tewolde, however, cautioned that in the liberalisation strategy, Ethiopian Airlines should not be “treated like other state enterprises set for privatisation.” He said given the airline’s role in connecting Africa, the government should capitalise on that to maintain its position in the continent. “As a pan-African airline, I don’t see any reason why we should not sell the minority shares of Ethiopian Airlines to African countries if they are interested in buying,” Mr Tewolde said at a press briefing. He expressed hope that the advisory council on privatisation set up by Prime Minister Abiy Ahmed would consider such issues. Acquisitions Africa’s largest airline by revenue and profit, according to the International Air Transport Association, has stepped up its expansion plan by setting up hubs across the continent. The airline has been in talks with African governments such as Chad, Guinea, Equatorial Guinea, Djibouti, Nigeria, and Mozambique to set up carriers through joint ventures. Mr Tewolde said the airline seeks to increase air connection within Africa that currently stands at 20 per cent. Ethiopian Airlines is set to launch Chadian Airlines and Guinea Airlines later this year in separate joint ventures with the Chad and Guinean governments respectively. It will own a 49 per cent stake in each of the carriers, with the governments holding the remaining 51 per cent. Mr Tewolde said the airline will also set up a new carrier, Ceiba Intercontinental, in a joint venture with Equatorial Guinea. It holds a 45 per cent share of Zambian Airways that is set to be relaunched in October after more than two decades. Ethiopian Airlines already runs Togo-based Asky Airline where it holds a 40 per cent stake and Malawian Airlines where it has 49 per cent share. Mr Tewolde said the airline is among the frontrunners to set up and run a new national carrier for Nigeria. In addition, he said it already has contracts for maintenance work with Nigeria’s Arik Air – the largest private airline, and Medview Airline. In Mozambique, the carrier plans to set up a subsidiary, the Ethiopian Mozambique Airlines. In Ghana, Mr Tewolde said they have been in talks with Ghana to have direct flights between Accra and London. Ethiopian Airlines Group chief executive Mr Tewolde Gebremariam (left) addressing the press on August 11, 2018 in Addis Ababa. He is flanked by other company officials. PHOTO | ANDUALEM SISAY Profits The airline announced a $233 million net profit for the 2017/18 financial year, a $4 million rise from $229 million it reported the previous year. Its operating revenue rose 43 per cent to $3.21 billion. Passenger numbers increased by 21 per cent to 10.6 million. The airline purchased 14 aircraft in the financial year that ended last month to bring its fleet to 100, and added 21 destinations. Ethiopian Airlines recently announced a joint venture agreement with German logistics giant DHL which offers the German firm a 49 per cent stake in cargo hauling business. It is understood that the carrier is already in talks with global electronic giants like General Electric (GE), Samsung and Techno Mobile to set up their storage and distribution centres in Addis Ababa, which will then allow the airline exclusivity in providing shipment services within the continent, with DHL undertaking the last-mile connectivity. The airline is also set to start operations of a new $350 million high-end hotel that is under construction.