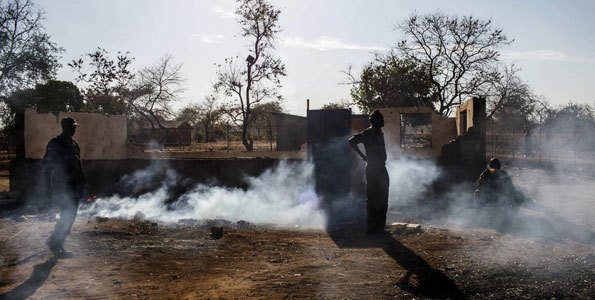 JUBA (HAN) February 1, 2016 – Public Diplomacy and Regional Stability Initiatives News. South Sudan government troops killed some 50 people by stuffing them into a shipping container in baking heat, ceasefire monitors have said in a report noting the latest atrocities in two years of war.

The report, by the Joint Monitoring and Evaluation Commission (JMEC), was submitted to the African Union (AU) summit and made public late Sunday.

The atrocity, titled “concerning the killing of civilians in Unity State”, was one of several listed as examples of ceasefire violations carried out by forces on both sides.

“About 50 people suffocated in a container on about 22 October. The investigation was protracted. Attribution of responsibility: Government Forces,” the report read.

Other crimes listed include rape and murder, and the capture and looting of UN river barges.

There was no immediate response from South Sudan’s army, but spokesmen have rejected a long list of previous reports detailing accusations of atrocities.

A UN panel of experts has also said South Sudan’s President Salva Kiir and rebel chief Riek Machar should face sanctions for their role in the war.

JMEC chief Festus Mogae, a former Botswana president appointed to the role by regional bloc IGAD, warned that efforts to force through a unity government had stalled after Kiir nearly tripled the number of regional states, undermining a fundamental pillar of the power-sharing deal.

“The government’s action has led to an impasse,” Mogae said, in an appeal to the AU.

“Given the fragility of the security situation in South Sudan, the renewed risk of conflict, and continued insecurity affecting the humanitarian relief effort, emphatic, stern measures should be taken by the African Union… rhetoric alone can only do so much,” Mogae said.

East Africa’s IGAD bloc also called on rival forces to allow food into conflict zones on the brink of famine, where aid workers have warned tens of thousands may be dying of starvation.

IGAD said it was “appalled by the deterioration in the humanitarian situation in South Sudan, and demands immediate action by the parties to ensure unconditional humanitarian access.”

Over 200,000 South Sudanese civilians are sheltering inside UN camps ringed by razor wire, a bleak barometer of ongoing conflict despite peace efforts.

“Amidst rapidly declining oil revenues, the public resources of the country have been largely squandered on financing the conflict,” Mogae added.

“As far as we’re concerned, the implementation of the peace process still remains on track,” Nhial told AFP during AU talks on Saturday.