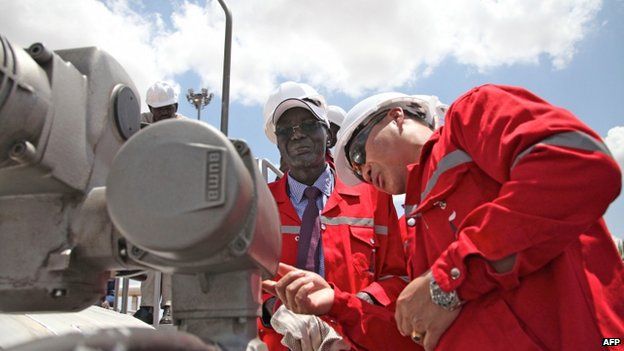 JUBA (HAN) February 5, 2016 – Public Diplomacy and Regional Stability Initiatives News. South Sudanese government on Wednesday announced that it has reached an understanding with the government of neighbouring Sudan from which it seceded in 2011 to reduce charges for transporting crude oil to the international markets through Sudanese territory.

South Sudanese minister of petroleum and mining, Stephen Dhieu Dau, told reporters after concluding a closed door meeting with his Sudanese counterpart had reached an agreement to review the charges considering the sharp fall in oil prices.

“Our meeting has finished. We have discussed and agreed in principle to review the agreement, especially the section related to the oil and now we have resolved to negotiate. And when we negotiate on the transitional financial arrangement in particular, it will not be a fixed $15 per barrel as it was agreed in 2012. It will be fluctuating up and down depending on the prices of the crude globally,” minister Dau told reporters on Wednesday.

He said the two parties through their technical teams would work out how much the new charges would be.

The young nation is obliged under the terms of the 2012 deal to pay Sudan $9.10 per barrel for oil flowing using Petrodar facilities in Upper Nile in addition to a fee of $15 per barrel in fulfillment of a $3.028 billion package which the two sides agreed as transitional financial arrangement (TFA). The TFA is meant to help Sudan cover the gap resulting from the loss of revenues due to secession of South Sudan from Sudan in 2011.

But now the two oil ministers representing South Sudan and Sudan hinted a fixed $15 per barrel rate would be renegotiated and the amount of $3 billion will not be affected by the new arrangement.

It will continue to be paid over a longer period of time. The transitional financial arrangement (TFA) payment, according to South Sudanese oil minister, “will be extended to more years.”

Dau’s remarks were quickly confirmed by the Sudanese minister of petroleum, Mohamed Zayed Awad, saying they “have agreed in principle” to reduce the monthly payments for transitional financial arrangement and extend period for payment.

He declined to reveal the rate at which his country would be paid as part of the new understanding between the two countries, saying it will be determined by team which the two sides would form to come up with reasonable rate based on market reactions.

“We don’t want to talk on figures because we are not ready as it requires a lot of technical work and may be after when they conclude – we will tell you,” he added.

The war torn young nation has been hit by economic crisis as prices of its only export commodity, the oil, has dropped from $110 per a barrel before the civil war in 2013 to just $24 per barrel.

After paying Sudanese their charges for transporting the oil through their facilities as well as paying oil companies, the government of South Sudan remains only with less than $5 dollars a barrel.