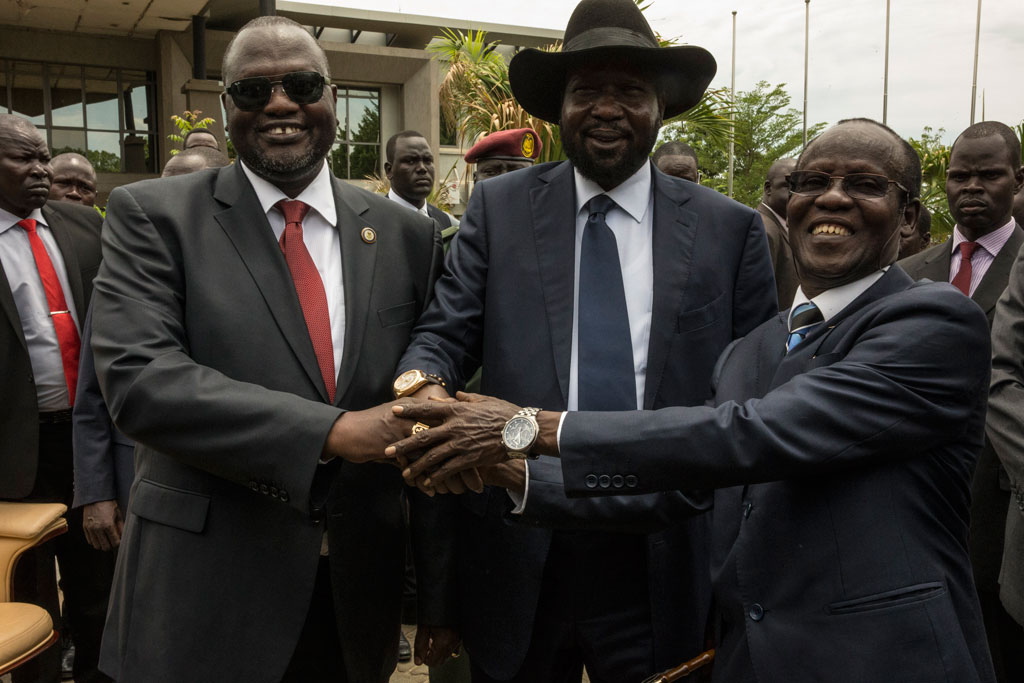 JUBA (HAN) May 1. 2016. Public Diplomacy & Regional Security News. The South Sudanese government on Saturday commended what it described as a positive response from members of the international community after formation of the Transitional Government of National Unity (TGoNU).

“We welcome with open heart and mind as the government the support of the international community. There have been positive statements from different countries and international organizations after the return of the first vice president and after the formation of the transitional government of national unity”, the parliamentary affairs minister, Peter Bashir Gbandi toldSudan TribuneSaturday.

“We are not an island. We are part of the international community”, he added.

The minister was reacting to comments attributed to members of international community which reacted to the formation of South Sudan’s TGoNU on Friday.

“Such positive statements shows that it can be an opportunity to work together with our international partners to restore hope of our people in the government and build the nation together”, said Gbandi.

The members of the Troika comprising United States, United Kingdom and Norway, which are the key players and guarantors of peace agreement, issued a statement welcoming the formation of what they referred as the “long-awaited formation” of South Sudan’s transitional government. The countries, however, said they were concerned that the new government did not have sufficient women representation in accordance with the 25% quota allocation to women by the constitution.

“While formation of the transitional government is a step forward, with thousands dead, widespread atrocities committed, and millions displaced from their homes during the conflict, this is no time for celebration,” the Troika said in a statement issued Friday.

“The fighting must stop, decisive action must be taken to tackle the economic crisis, and there must be full cooperation with the UN [United Nations] and humanitarian agencies to ensure aid reaches those in need; formal and informal impediments must be removed,” it added.

The troika member countries vowed to support the TGoNU “if it shows it is serious about working for the good of the country and implementing the peace agreement in full.”

Meanwhile the UN Secretary General Ban Ki Moon said the formation of the new government is an “important milestone in the peace process” and urged South Sudan’s leaders to establish all institutions of transition.

He also urged the country’s warring parties to immediately cease all hostilities.

Canada’s foreign affairs minister, Stéphane Dion said his country welcomed the new government and hailed it as an “important step” toward national reconciliation.

“Most urgently, every possible step must be made by the national leadership to put an end to persistent conflict across the country and to give humanitarian agencies unfettered access to those in dire need of assistance,” Dion said.

Dion added it is crucial that the government move quickly to establish accountability measures to end South Sudan’s cycle of violence and impunity.

The European Union said the new government is a “welcome development” which is long overdue. “Now the leadership must work to deliver peace and security, as well as humanitarian access for the people of South Sudan,” the EU said, through its commissioner for humanitarian affair.

The EU said it would support the new government if it works to end persistent conflict, abuse of civilians, violations of international humanitarian law, and corruption.

“The worsening humanitarian situation and the suffering of the people of South Sudan have reached extreme proportions,” the EU said.

“Restrictions on access continue to impede humanitarian operations. The EU expects the Transitional Government to uphold its obligation to respect independent and unhindered humanitarian assistance.”

Pete Walsh, country director for Save the Children said the new government is a “golden opportunity” for the country to devote itself to children’s education for boys and girls.

“The formation of the TGoNU is not an end in itself – it’s the beginning of hard work to reverse the physical and psychological injuries inflicted on millions of children,” Walsh said.

He urged the new government to honour provisions of Chapter 3 of the peace deal, which says the parties must allow delivery of humanitarian aid, offer special consideration to conflict-affected persons such as women, children, orphans and release all child soldiers.