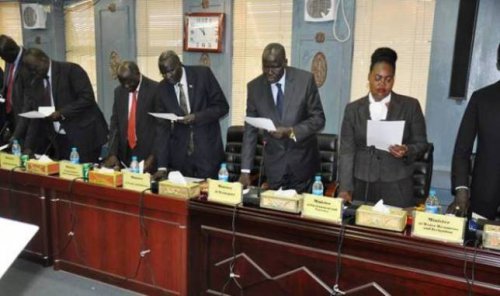 JUBA (HAN) May 23.2016. Public Diplomacy & Regional Security News.  The new cabinet of the Transitional Government of National Unity (TGoNU) in South Sudan has accepted to form a technical committee to review boundaries and determine the number states that have continued to stoke political tensions and remaining as one of the most sticking and contentious points for peace partners to resolve to proceed with implementation of the deal.

The cabinet has resolved to form a technical committee to review the boundaries of the states and come out with the recommendations to the council so that it would be the basis of discussions on how to move forward with how to harmonize opinions and views about the number states”, cabinet affairs minister Martin Elia Lomuro said in an interview with Sudan Tribune on Sunday.

Elia clarified the committee was not a replacement of the commission recommended by the communique of the Intergovernmental Authority on Development (IGAD), the regional bloc which mediated the peace talks to end the conflict in the country between rival parties and which called for suspension of the implementation of the establishment order creating number of states in January.

The issue of number of states has continued to generate heated debates, with some officials, including the Minister for Water Resources and Irrigation, Mabior Garang de Mabior, arguing the issue of the 28 states has only succeeded in evoking ethnic consciousness, against the principle of the nation state, which sought to bring together all the 64 ethnic groups under one nation.

“Instead, we are seeing ethnic groups that have never fought before such as Bari and Mundari in Central Equatoria go for each other over boundaries, resources and leadership,” said Mabior. The issue of states, according to Minister Mabior, should be suspended and implement the agreement on the basis of ten states and allow the number of states to be determined by the people at appropriate time.

The Joint Monitoring and Evaluation Commission (JMEC) led by former president of Botswana Festus Mogae had stated that it is not going to include the 28 states into the implementation process and urged partners to the peace process to come up with the appropriate number of states for the country.