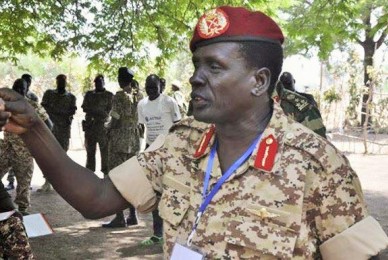 A copy of the agreement obtained by Sudan Tribune stipulates that “cognizant of the recent compromise peace agreement signed by the government of the Republic of South Sudan and the SPLM-io, SPLM-fds, considering the President’s call for peace and harmony to return to the people of South Sudan, and recognising the efforts of the President to unite all South Sudanese for building and developing the country, the government delegation and the delegation of the Federal Democratic Party/South Sudan Armed Forces, with support of the Kenyan Government, met in Nairobi – Kenya, on 24th December 2015 at the Intercontinental Hotel, and agreed” on needs for further dialogue.

“The FDP/SSAF welcomed President Salva Kiir’s peace initiative, and agreed to make peace with the government in-order to achieve a comprehensive peace and stability in South Sudan,” partly reads the MoU. Gen. Gathoth Gatkuoth Nyang signed on behalf of the FDP/SSAF while Tut Gatluak, the presidential adviser on decentralization did it on behalf of South Sudan government.

The rebel faction also agreed “to engage positively with the Government of South Sudan” to build trust, and work together to address underlining grievances expressed by parties that broke-away from Riek Machar, in consultation with their political and military leaders. “The FDP/SSAF agreed to send their first advance team to Juba by 30th December 2015 to continue consultations and finalize the details of the peace agreement,” adds the MoU. The FDP/SSAF broke away from SPLM IO in July citing lack of democracy in the group led by former vice president and first vice president designate, Machar. The decision came after Gen. Peter Gatdet and Gatkuoth were sacked by the armed opposition leader.

The ex-rebel commander, however, stressed that his faction was ready to negotiate peace with any group, castigating Machar for agreeing to sign the Arusha agreement that aimed at uniting all the different factions of South Sudan’s ruling party (SPLM). Source: sudantribune