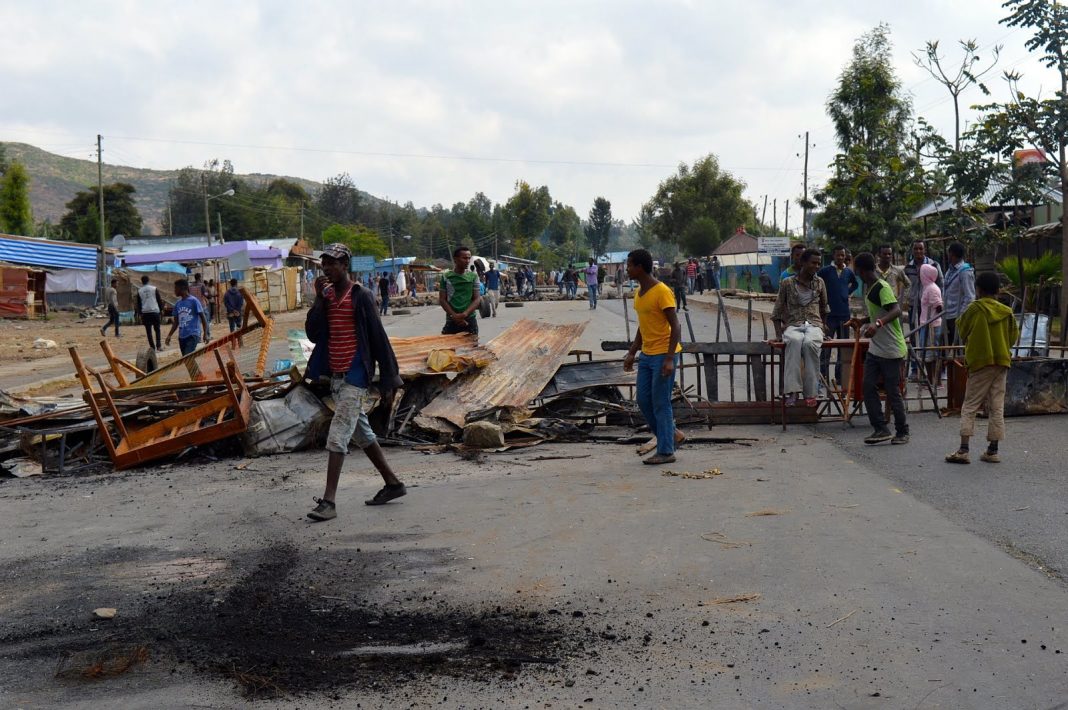 Addis Ababa (HAN) 29 April, 2017 – Public Diplomacy & Regional Security for Stability.
The opinion article “Liyu Police Raids in Oromia Testing Ethiopia’s Semblance of Calm” By. Ismail Mohamed Abdi.
The FDRE constitution has given assurance to human and democratic rights to citizens of our country. Democracy and democratic institution building is a long process specially in countries preceded by poor background economically and political system that is not inclusive to diversities of nations and nationalities. However, Ethiopia registered rapid and sustainable development, long lasting peace and stability during the last 26 years. The country recorded a double digit economic growth for many consecutive years. The success was achieved through the constitution of Ethiopia which have been approved by all nation and nationalities that used to live in monarch regimes for many years. Thus, the constitution is the perfect factor behind the countries wonderful economic development. But in any country practicing democratic building process and development activities it’s inevitable that there can be flaws of implementing plans. The most important thing is learning from weaknesses pinpointed out through evaluation and incorporate it to the next planning stage and implement it again. It is worthy to mention here that these mistakes are used by extreme medias and strategic enemies of the people of Ethiopia. They create fabrications far from reality. They exploit natural conflicts that arise from neighboring regions be it over border issues, resource competition, and backward thinking that have been accepted by the previous regimes. Therefore, the sentiments explained in the article written on March 5, 2017 at https://www.opride.com are nothing but replica of the above explained thoughts. They will never sleep until they see the dismantled Ethiopia so that they could take over the constitutionally established governance by nations and nationalities of the country. They don’t believe in free and fair election.
The recent conflicts of Somali Regional state of Ethiopia and Oromia Regional state over boarder conflicts would never make happy anybody who has proper and healthy mentality. Above all the people who are victims of the problem would feel wounded and try to think how can the conflict be ended. However, there are medias, extremists, groups and organizations who want to use and benefit from the bloodshed of two brotherly neighboring people of the two regions. They release negative information that is baseless and unfounded propagandas which in turn escalates the magnitude of the conflict. They do this just for paving their way to over throw legally elected government by the people. They don’t have a sense of feeling and sympathy of the people under severe conflict, and only think of their power hunger and comfort. On the other hand, the information they release, apart from completely unfounded, are not verified from the concerned bodies. They only use as a source for a few individuals or groups that they think they could speak and guide as they want. That is not journalism ethics or media ethics.

The strategic enemies of Ethiopia do not try to look in a neutral way the causes and the nature of conflicts which in turn leads to the solution that the two people want. Conflict can occur between people a federal or unitary system. As long as people live together, conflict will naturally arise. In this regard, our country’s federal system has its own mechanism of solving problems that historical claims or shortage of natural resources. The FDRE uses the social structures that already exist within the people to solve that may occur between neighboring regions.

However, the views and opinions stated at the site called Opride.com does not see the nature, analysis, problem, and solutions that is clearly mentioned in the FDRE constitution. It only targets individuals, regions, nations and nationalities. The site specifically attacks the Somali Regional President Abdi Mohamud Omar. Moreover, the article doesn’t want to acknowledge the achievements and sacrifices that the Special force (Liyu Police) have made for their region and Ethiopia as a nation. It’s not appropriate to reply the details and issues portrayed in this kind of unsubstantiated, biased, and completely unfounded writings. Therefore, I will try to put facts that is known as follows.

The Somali Regional State of Ethiopia’s Special force is established by law through the proper governance structure of the region with clear mandates and responsibility to bring peace and stability in the region, in which they achieved fully with fallen comrades and sacrifice for the region and the country being part and parcel of Ethiopia. This in turn resulted in the development activities which have been implemented in the last seven years of successful historical achievement. The development activities include mega projects such as Water catchment dams, bridges, roads, universities, and many other livelihood projects throughout the region. Agricultural practices, which have been very hard to convince the people to cultivate crops and pasture have been started recently in a huge higher government official’s involvement to cop up the long-time drought stricken population of the region. All these achievements have not been done without the Special Police force struggle for peace, which was actually a precondition for full intervention in development activities. The Special Police force accomplished tremendous historical, heroic struggle and paid price for their region and their people by abolishing the so called ONLF anti-peace element, which was operating in the region for long time. It’s not appropriate to call them and perceive them as enemy, looters, and rapists. If the Somali and Oromia regional states are fully peaceful, both can benefit from trade, cultural, experience sharing, and prosper shared projects which have been practiced. One region depends on other as a nation and the headache of one region dashes to the other. The strategic enemies, extreme medias, web pages, etc., cannot understand or willing to know what the Somali Regional State of Ethiopia have been through due to anti-peace elements presence in the region. They have been trained, supported, and disciplined as the FDRE Military. They fought together with the FDRE military as one sided of a coin.

Therefore, embarrassing the special police force, who has sacrificed for their people is like embarrassing our FDRE military too. Believe it or not the FDRE Military and the special police forces are heroes who defend our country from enemies and pave the way for the glorious development activities that our nation is enjoying now. They are also safeguarding the nations threat from outside and inside so that people can do their daily jobs to feed and educate their children safely and peacefully.
As far as the Somali Regional President Abdi Mohamud Omer is concerned, the issues raised here are all false and filled with rage and hatred. It is not appropriate to divert issues in to personal attack. All the people in the region now fully realized that President Abdi Mohamud Omar is a hero who lead and brought tangible results in solving the problems of instability of the region deep rooted in several decades by eliminating the ONLF factions once and for all that used to operate throughout the region. This paved the way for the above-mentioned development activities.
Boarder disputes were common in many parts of Ethiopia and will continue to be a problem. But most of them have been handled with proper leadership commitment. It was common that boarder conflicts have been aggravated by antagonistic party apparatus, some diaspora, and some officials within the government officials looking the matter from one side and not the other side of regions. Hence, I see that this article is only one sided and not trying address the problem holistically. I know personally that the president of Somali Regional State of Ethiopia Mr. Abdi Mohammed seriously wants to end the territorial disputes peacefully through round table discussion and negotiation for the wellbeing of the two peoples. This article by no means is part of the solution but only fuels the situation to worsen the conflict. The words portrayed and chosen here are the same as that of the so called ONLF in which we used to hear long time ago.

Finally, the two regions leaders, the people, and the FDRE are engaged in solving the conflict through the constitution as stated above. The federal system has plenty of experiences of solving such kind of conflicts. The people of the two regions are brothers who share boarders; lived together and will be living together; have common enemies of poverty; fought their strategic enemies together in their own regions; and shared experiences in development activities implemented successfully in our country. My last advice to the admin who posted this or whoever who wrote this “Stop playing with the two brotherly peoples blood by aggravating the situation rather than being part of the solution” or else you can continue writing this kind of unpleasant and annoying posts which doesn’t have audience.
TOL Admin Note:These recent articles published on TOL about the Somali and Oromia Reginal states border areas are not from any state government or the federal government. They are exclusively from the individuals who are writing the articles. If anyone want to write a rebuttal in a respectful way they are more than welcome to do so.