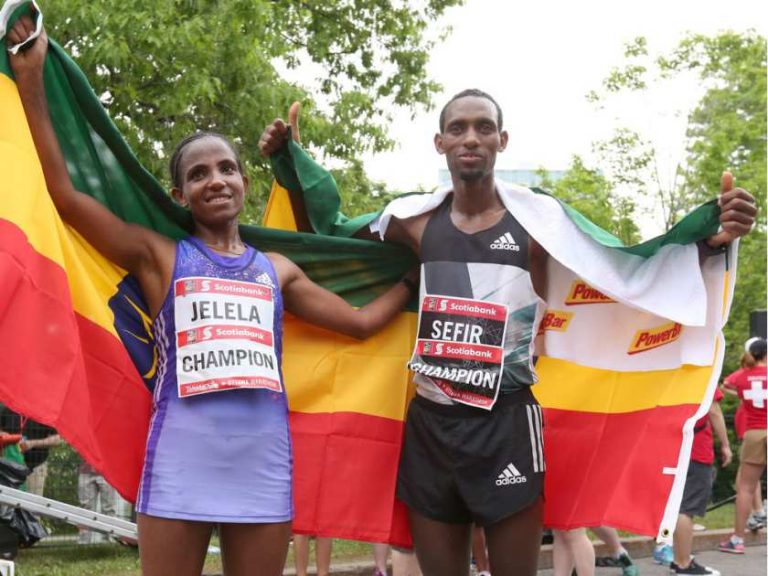 OTTAWA (HAN) May 30.2016. Public Diplomacy & Regional Security News. On your mark, get ready, sweat. The fact that the city is nicknamed Hottawa didn’t stop close to 47,000 of people from running in this year’s annual Ottawa Race Weekend.

Ethiopia’s Dino Sefir ran the full marathon in the fastest time, finishing the 42.2 kilometre trek with a time of 2:08:14. The top Canadian man, Kip Kangogo of Lethbridge, Alta., finished in 2:21:22.

The fastest woman to finish the marathon was Koren Jelela from Ethiopia. She crossed the finish line after 2:27:06.

Tarah Korir was the top Canadian woman in the marathon, finishing in 2:35:44.

Around 11:30 a.m. the marathon course was shortened by about 10 kilometre to offset the rising temperature.

Ottawa paramedics said they responded to more calls than usual during Sunday’s races, with nearly 90 runners checked at the medical tent or on the course and two taken to hospital.

Race organizers bumped up the start time of this Sunday’s half marathon by 45 minutes to take advantage of cooler temperatures.

Canadians did well in the half-marathon, taking the top three spots for both men and women.

Ahmad Sakr got up early to watch the marathon runners take off at 7 a.m. — and held up a sign that read, “Getting up early to make this sign wasn’t easy either.”

“We were actually on a rooftop with a group, and just cheering them on as they went by. It’s good morale,” he said. “I like the race — it just brings the whole city together. It’s an amazing time and a wonderful weekend. Everyone is out, everyone is happy. It’s beautiful.”

His friends held up signs that read, “This is a lot of work for a free banana,” and “If Trump can run for president, you can run 21km/42km.”

The top female runner in the 10K was Kenya’s Peres Jepchirchir, 22, who finished in 31 minutes 29 seconds.