Home frontpage Opinion: The UN’s Next Genocide in Somalia 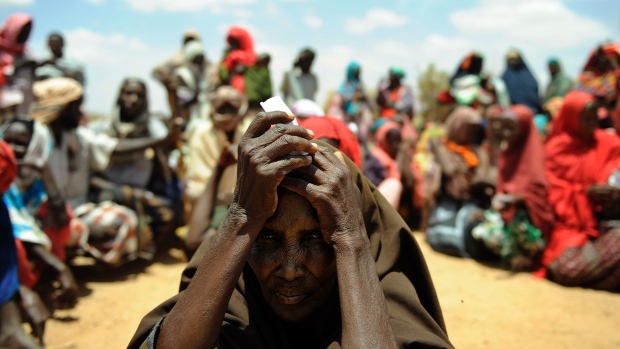 ASMARA (HAN) September 27.2016. Public Diplomacy & Regional Security News. BY: Thomas C. Mountain. The UN just announced that due to drought and famine over 300,000 Somali children are suffering from severe malnutrition. This means
that over 100 children are already dying everyday from starvation.
Soon the number will reach many hundreds a day, bringing back memories
of the most recent Great Horn of Africa drought in 2011-12 when the UN
admitted that 250,000, almost entirely children, died from starvation.
And this drought and famine is worse.

The reason so many Somali children are starving to death is triggered
by the latest climate disaster in the form of the El Nino drought. But
the fact that Somalia itself, this meaning from the former capital
Mogadishu south to the Kenyan border, is in a state of foreign
occupation and war is exacerbating the situation.

The ongoing war in Somalia was started by the UN back in 2006 when the
UN and AU, and ultimately the USA, sanctioned Ethiopian army invaded
Somalia and overthrew the existing government headed by the Union of
Islamic Courts.

Until the Ethiopian invasion and occupation of Somalia in 2006 the
country was peaceful and starting to rebuild a war torn nation thanks
to the Union of Islamic Courts (UIC), a coalition of Somali Clan
Elders and senior Islamic religious leaders or Sheiks.

The UIC’s popular militias had driven the warlords and gangsters out
of Mogadishu and through negotiated settlements had spread its
influence increasingly to the south bringing peace to most of Somalia.

The Port of Mogadishu had been reopened and talks for reopening
Mogadishu Airport had begun. In other words, for the first time since
1991 Somalia was in a state of peace.

This was all shattered when the UN and its  African Union gendarmes,
the Ethiopians, invaded Somalia, occupied Mogadishu and placed a
bounty on the heads of the UIC, who mostly being older, had to flee
the country into exile.

What was left to lead the wave of Somali nationalism opposing the
invasion and occupation by their historical enemies, the Ethiopians,
was Al Shabab, the youth wing of the UIC who picked up the gun to
fight an armed struggle for national liberation.

The UN, the AU and behind it all, the USA, was never going to allow
any “Islamist” government to take over in such a strategically
critical country like Somalia at the mouth of the Red Sea and
potentially able to control the Baab Al Mandeb entrance to the Indian
Ocean.

Just as in Libya, the western instigated funded and directed overthrow
of an independent, nationalist government created the conditions for
fanaticism to thrive, as in Al Shabab in Somalia.

The Somali people didn’t create Al Shabab, the UN did by starting a
war that is still raging today, ten years later. And worse yet by
creating a monster in the form of an army lead by religious fanatics
under a banner of Somali nationalism you guarantee that there will be
unending violence and even more famine and genocide.

Famine and genocide, it seems something that the UN specializes in
when it comes to Somalia, for the UN is responsible for feeding the
internally displaced persons its war against the Somali people has
been creating for a decade now, and simply fails to do so.

In 2011 the UN via UNICEF only budgeted 10 cents a day, $35 million,
to feed a million Somali refugees  and a quarter million starved to
death. Today there are far more children starving for this time the
drought is worse. Yet the UN is standing by and once again allowing
hundreds of thousands of Somali children to starve.

The UN has spent untold $Billion$ funding the AU implemented
occupation and war in Somalia in the name of fighting terrorism in the
form of Al Shabab, with over 30,000 AU “peacekeepers” occupying
Somalia.

Sounds familiar doesn’t it, $Billion$ for war and never mind the
hundreds of thousands of starving children the UN is responsible for?
And so it happens that we find ourselves once again predicting the
next UN sponsored genocide in Somalia.

This article was originally published on Telesur.

Thomas C. Mountain is an independent journalist in Eritrea, living and
reporting from here since 2006. His speeches, interviews and articles
can be seen on Facebook at thomascmountain and he can best be reached
at thomascmountain@gmail.com