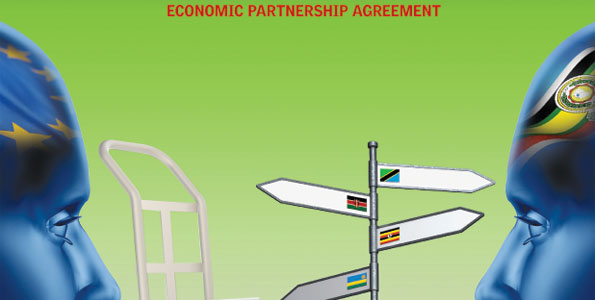 By ALLAN OLINGO. Members of the East African Community are split down the middle again after Uganda joined Tanzania in pulling out of signing a trade pact that is key to continued access to the European Union market without paying duty.

Although Kenya, Rwanda and Burundi are ready to sign the Economic Partnership Agreement (EPA) with the EU, World Trade Organisation rules do not allow countries aligned to a trade bloc to sign up individually.

Uganda indicated last week that it was not going to sign until the bloc had reached a common position on all issues.

“Everyone, including the EU is now agreed that we don’t sign,”  said Julius Onen, the Permanent Secretary in Uganda’s Ministry of Trade.

“We must have a common position on all the issues. As EAC, we maintain solidarity and want to move together as a common market. It’s now the agreed position, even for the EU, that we have to sign together,” he added.

A week ago, Aziz Mlima, Permanent Secretary in Tanzania’s Ministry of East Africa, said the country would not sign the agreement following the vote by Britons to leave the EU.

“Our experts have analysed the pact and established that it will not be to our local industry’s benefit. Signing this pact at the moment would expose young EAC countries to harsh economic conditions in post-Brexit Europe,” Dr Mlima said.

“Internationally, we trade with Britain, China, India and South Africa. When you don’t have Britain in a deal with Europe, what do you have? We have to think it over and this can take any duration to decide,” he said.

Tanzania officials have variously raised concerns over the lack of export duties in the EPA and import duties for intermediate and finished goods, saying the joint impact would be revenue loss from swamping of the Tanzania market with EU goods while allowing export of raw materials critical to industrialisation.

“We have to discuss this and ensure we do not lose under these agreements,” Mr Mwijage said.

Rwanda is keen to have the partnership signed to establish a predictable trade regime with the EU saying unilateral bilateral offers can be withdrawn any time.

“In the EU-EAC-EPA, you cannot talk about one country (signing). Talk about a bloc,” said Rwanda’s Trade and Industry Minister, Francois Kanimba.

A trade consultant who participated in drafting the EAC-EU EPA has questioned Tanzania’s motives, saying the concerns raised had been fully addressed.

“The draft was jointly initialled, every country contributed to the negotiations before the EU and EAC lawyers checked it,” John Bosco Kanyangoga, a regional and international trade consultant at the Kigali Trade and Development Links said.

The breaking of ranks over the pact which was set for signing at the beginning of next month has kicked off a diplomatic frenzy as the clock ticks towards November 1, the deadline the EU gave.

In default, products would be charged duty of up to 8.5 per cent under the Most Favoured Nation status accorded to countries that have traditional trade ties with the EU.

Kenya is in a unique position within the EAC by virtue of its ranking as a developing country, meaning only its products would be denied duty free access.

Its partners — who are ranked least developed countries — would continue to enter the EU market duty free under the Everything but Arms concessions for the world’s poorest countries. Under this protocol however the rules of origin are much tighter.

Kenya’s Foreign Affairs Minister Amina Mohammed was in Tanzania’s on Wednesday to lobby her counterparts to rescind their decision. After the meeting, Tanzania’s President John Magufuli held a telephone conversation with Kenya’s President Uhuru Kenyatta.

Tanzania had three days before Dr Mlima’s announcement skipped a virtual EAC Secretariat meeting chaired by Uganda’s Minister of Trade, iIndustry and Co-operatives, Amelia Kyambadde, to deliberate on the preparation for the signing of the pact ahead of the conference.

Dr Chris Kiptoo, Permanent Secretary in Kenya’s Ministry of Trade, said that Kenya has since activated multi-level talks with its regional partners.

Two months ago, ministers from the five partner states agreed to sign the document during the Council of Ministers meeting in Arusha in the first week of August, although the EU had wanted it to be signed on the the sidelines of the Unctad conference in Nairobi this week.

This was to be followed by ratification by the European Commission on October 1.

“We envisage Tanzania reaching middle-income status in the next few years, where a different set of rules will apply. For now this is an EAC affair and we shall await the decision from the bloc,” said Roeland Van De Geer, EU head of delegation in Tanzania.

EAC Director General of Customs and trade Peter Kiguta said that if any member states doesn’t sign the EPA, then it will bring more inconsistencies into the market.

This is the second time that Tanzania — the current EAC chairman — will be throwing the region into a diplomatic spin over the EPA, after a similar move in 2014 that saw Kenyan exports to the EU attract duty of up to 22 per cent, under the Generalised System of Preferences (GSP), for three months.

The stakes are higher for Kenya fresh produce (vegetable, fruit, flowers and fish) farmers this time round because the items are also set to be removed from the GSP list from January next year.The EPA dispute comes just two months after Uganda and Tanzania parted ways with Kenya on the construction of a pipeline to take the region’s oil to export markets.