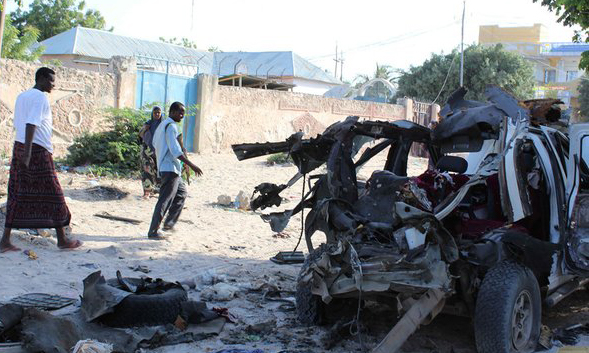 MOGADISHU (HAN) May 9.2016. Public Diplomacy & Regional Security News. Three police officers have been killed  in a bomb and gun attack on a police station in the Somali capital on Monday, city authorities said.

A suicide car bomber and a gunman also died, as did two civilians, apparently shot by police responding to the attack claimed by Somalia’s Al-Qaeda-aligned Shebab. Other civilians were also wounded.

“The attack involved two Shebab members, one of them driving a car loaded with explosives, and another tried to storm the police headquarters but was shot dead. We have lost three policemen,” said Abdifatah Omar Halane, spokesman for the Mogadishu city administration.

He added that two civilians were also shot dead.

“Two other civilians were shot dead separately at a nearby street,” Halane said, adding that the police believed to be responsible had been arrested.

The Shebab militants are fighting to overthrow the internationally-backed government in Mogadishu, and launch regular attacks in the city.