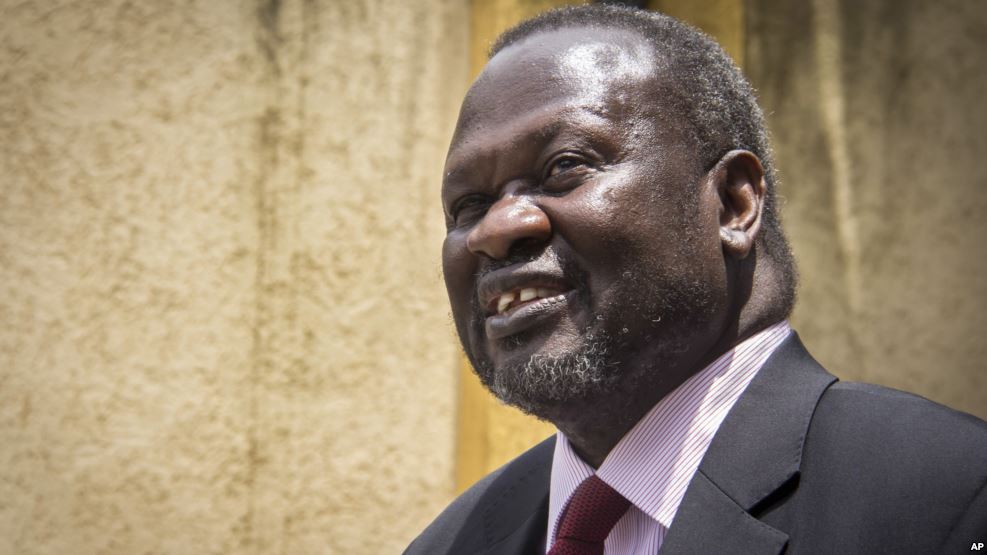 JUBA (HAN) September 25.2016. Public Diplomacy & Regional Security News. The armed opposition faction (SPLM-IO) led by South Sudan’s former First Vice President, Riek Machar, has for the first time come out with a statement declaring war on the “regime” in Juba under President Salva Kiir and called on the international community to declare it a “rogue” regime.

According to Article 2 (d) of the resolution obtained by Sudan Tribune, the SPLM-IO’s political bureau resolved to “Call for reorganization of the SPLA (IO) so that it can wage a popular armed resistance against the authoritarian and fascist regime of President Salva Kiir in order to bring peace, freedom, democracy and the rule of law in the country.”

This is the first official statement from the opposition’s leadership since the 8 July violence erupted in the capital between Machar’s bodyguards and forces loyal to President Kiir, killing over 200 soldiers.

The resolution also accused President Kiir’s regime of allegedly attempting to “assassinate” the leadership of the SPLM-IO at the Juba-based presidential palace when the fighting erupted.

The opposition group, however, said they were for peace and to “resuscitate” it, calling for rapid deployment of regional forces in order to salvage the peace agreement signed in August 2015.

Currently the resolution said, both the peace agreement and the transitional government of national unity have collapsed without the SPLM-IO as a peace partner.

Machar vowed to reorganize to “wage a popular armed resistance against the authoritarian and racist regime of President Salva Kiir.”

This is the first political statement Machar has issued ever since he fled South Sudan, following an attack on his residence in the young nation’s capital.

Machar immediately demanded that additional peacekeepers be sent to increase numbers of the 12,000-strong UN force in South Sudan. These forces will be tasked with restoring security in Juba.

Barely five years after its independence from neighbouring Sudan, South Sudan descended into civil war in December 2013. Tens of thousands of civilians were killed and more than 2 million displaced.

In August last year, a peace deal was signed by both Machar and Kiir, but fighting in Juba put the accord at risk of possible collapse.

“(The SPLM-IO) call on the international community to declare the regime in Juba a rogue government,” the resolution reads in part.

It urged those monitoring the peace deal to suspend their activities.

Meanwhile, a senior SPLM-IO member, who sought permission to return to Nairobi, Kenya before the Khartoum meeting commenced, said he supported armed struggle against the Juba establishment.

“These people, the people in Juba, Salva Kiir and his group understand no other languages than the language of guns. If you talk of nonviolent language, they think you are doing so because they have weakened you and will not listen to you anymore. So I told Dr. Riek that we must pursue armed struggle until we achieve objectives of the movement,” Ramadan Hassan Laku, the SPLM-IO’s national committee chairperson for governance affairs told Sudan Tribune on Saturday.

Observers say Hassan’s views show the level of difference within the movement on how to approach the settlement of the conflict in the country. Those advocating for nonviolence, they argue, are using it as a strategy to tactically avoid being viewed by the global community as warmongers to be sanctioned while the ones advocating for armed struggle see the approach as the only way through which wider attention could be attracted to demands that must be settled in a position of strength.