Home Eritrea Land Grabbing: New Colonialism and How about Eritrea? 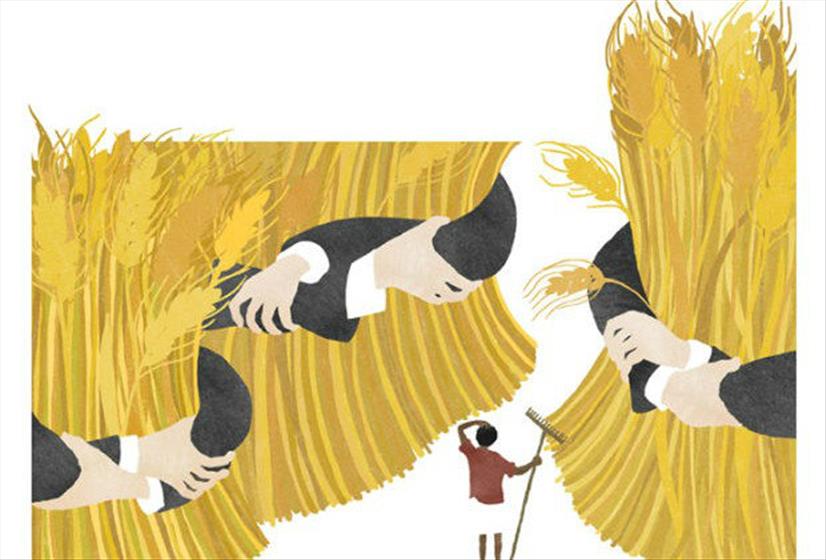 BY:Mela Ghebremedhin. Land grabbing, as the phrase suggests, requires one to grab, or in other words, “to seize, to grasp, to take a grip of or to get one’s hands on.” This action of taking suddenly and roughly is the reality of today’s Asian and, mostly African soil. In other words, Bwegise bra Mwesigire (2014) clearly explained the phenomenon in his article entitled Land Grabbing in Africa, the new Colonialism and he began by saying that land grabbing is “the silent recolonization of Africa happening on a mass scale. … Land is the source of life and death, but it might not always be with us.” His powerful statement cannot be denied in regards to the reality of today’s Africa. In fact, land has been put at the centerpiece of conflicts of interests, of wealth and poverty, of opportunists and marginalized communities, powerful against the powerless, profits versus social justice.

This phenomenon which emerged in 2008, in line with the food and financial crisis, this purchase or long-term lease of vast tracts of land from mainly poor, food-insecure countries of the Global South, has been done in the name of food security and rural agricultural development (Daniel, 2013).

The current issue in terms of land grabbing is the impact on local population and the lack of ownership by governments selling the land to foreign investors. Actually, after reading some news articles recently on Tanzania adopting a new policy to curb land grabbing, this issue of land grabbing may have some relevance to the situation in Eritrea. As the title inquires: Is land grabbing possible in Eritrea? In today’s article, we will try to shed some light on this particular issue in comparison with other countries, mainly in Africa.

The first sentence of an article on Tanzania by Kizito Makoye Shigella (2016), Shigella stresses that the country adopted a new national land policy lowering the period of lease to foreign investors from 99 to 33 years. Although it may seem significant that the length of the land’s lease has been reduced by roughly 60 years, it’s still equally significant that local communities will lose any rights to cultivate or inhabit their indigenous land for multiple decades.

The impact of land grabbing is realized on multiple levels of society, starting from the local population as the first sufferers, followed by local markets and then the national economy. The economic power of one’s country is weakened and the nation soon becomes dependent on imported goods, endangering a nation’s food security. Besides all the spillover effects of land grabbing, it may also be a source of civil unrest, conflicts and migration.

Certainly, governance and regulatory systems in regards to land tenure and rights are crucial as the land is vital resource from which human beings depend on, particularly areas dependent mostly on agriculture as a source of income. Without doubt, this is case in Africa where the majority of people on this continent make a living through agriculture and farming. Thus, taking away their source of living is an impending source of major crisis on the continent. Corruption is rampant in this sector, as we see in Kenya where “land grabbing by public officials reached systemic proportions.” In addition to this, Dr. Mohammed Hassan?, an Ethiopian activist, expressed during his lecture in Asmara on Thursday that in the Gambella region only, 3 million hectares were taken away from the local peasants. He went one by explaining the process, “first you take the land, create a fake business, and ask for money from the Bank and you start building houses and so on without any permit or any quality control.” This kind of corruption is happening at the expense of peasants chased away from their ancestral land.

These examples of corruption around land possession are a continuity of a power struggle against the selfish policies of those on top, who submit to foreign powers at the expense of their own citizens under the pretext of “economic development.” The policies that call for the leasing of large tracts of land for thirty, fifty, or even one hundred years to foreign investors have thrown participating countries into a vicious cycle of dependency and lack of food security. Most investors leasing the lands will look protect their own interests in world of finite resources for a growing global population facing climate change. Ensuring food and energy supplies are key factors influencing investors from foreign countries, which can no longer rely on their own local markets to feed their people. As such, these entities are engaging in new form of colonialism. The Middle East, China, India, Western countries are at the top in hoarding resources elsewhere while exploiting a cheap local labor market. Indeed, the irony is that the same people whose lands are taken away are the ones left to work that very land since they are left with choice, no place to live and no livelihood. Returned to the status of serfs they till and work the land for a few shekels. Entire communities and large populations are exploited and thrown into a life of inescapable, permanent poverty.

Most of African land sold to foreigners are allocated for producing a specific product that is solely for export. As such, some fertile areas of land which used to be used in farming or livestock are instead transformed for flower production or biofuel extraction or some other similar use. However, nothing is for the locals. In consequence, we witness overexploitation of land, lack of food security, lack of social security and the appearance of chronic diseases and cancers. A report published in 2014 by World Development Movement (WDM), Carving up a continent: How the UK government is facilitating the corporate takeover of African food systems, stressed how Multi- National Corporations (MNCs) such as Monsanto and Unilever were targeting important lands of African countries on coastal areas such as Mozambique or Burkina Faso.

The issue around land grabbing raised concerns in recent years such as the FAO’s deputy director, David Hallam who stressed that “there is a danger that host countries, particularly the more politically sensitive and food-insecure, will lose control over their own food supplies when they need it most” (Bello, 2009). This trend towards a new form of colonialism is showing resistance by local populations and some governments trying to shift away from such predatory trade relations. They are beginning to see through the illusion of promoting “job creation” and “sustainable development” via Foreign Direct Investment towards rich areas of land. Surely, land tenure laws— both customary and national regulations—are key in protecting one country’s wealth and ensuring the preservation of the local population’s interests. This is where the issue of sound land governance comes into play. In other terms, clear national policies of protecting and monitoring could only be put in place through goodwill and fighting against corrupt elite groups and officials.

Land governance, hence, as a tool for food security and good use of national resources are matters important to the Government of Eritrea. Indeed, as the people of Eritrea depend largely on agriculture and livestock, ensuring food security is at the forefront of Eritrea’s development strategy. Learning from neighboring countries, Eritrea has focused and continues to focus on long-term development rather than short-term profits. Already prior to independence the EPLF put in place a food distribution program to the population in liberated areas. At independence, the Eritrea Grain Board (EGB) was quickly introduced in 1993 to ensure a strategic food reserve policy aimed at stocking, preserving and managing the food reserve as well as purchasing foodstuffs from the open market.

In terms of land access to mining companies, the government managed to negotiate a 50/50 share with Zara Mining Company and 40/60 share with Nevsun. How often does one see such deals negotiated in Africa? On top of all this, any new investment, particularly in natural resources, are negotiated under the theme of respecting local communities. As such, the livelihoods of people require protection and employment opportunities must be given—with greatest priority—to those living near a mining site and preserving the environment through effective waste management system. According to Eritrean law, a foreign investor will not be authorized to own land and Eritrea’s desire for self-reliance makes it highly unlikely that the nation will fall for the neocolonial phenomenon of land grabbing.