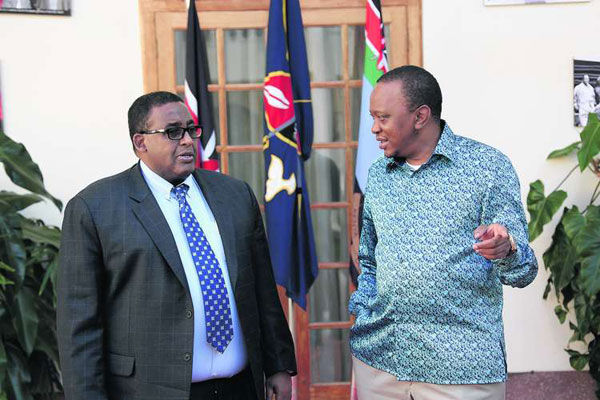 A statement issued after the meeting said the two leaders agreed on the need to fully operationalize the Joint Commission for Cooperation (JCC) which aims to upscale engagements including cross-border security, joint infrastructure development projects as well as cultural exchanges.

The two leaders said the joint commission was an important vehicle for boosting bilateral engagements between the two countries.

They also discussed the security situation in Somalia which has faced increased attacks from Islamist militant group, Al-Shabaab and in the region.

The Horn of Africa nation has not been in the mainstream regional business since early 1990s when the central administration collapsed, giving way to a civil war that nearly ended following the intervention of the African Union through the African Union Mission in Somalia (AMISOM).

The Prime Minister thanked President Kenyatta and the Government of Kenya for playing a pivotal role in the ongoing efforts to stabilize Somalia.

“The Prime Minister affirmed his government’s commitment to cooperating with the United Nations High Commission for Refugees (UNHCR) and the Kenya Government in ensuring a smooth repatriation of the refugees,” the statement said.

Analysts say the Horn of Africa nation has improved security which has enhanced investor confidence, including those seeking contracts in reconstruction in a country where infrastructure has been reduced to a bare minimum by over 20 years of war.