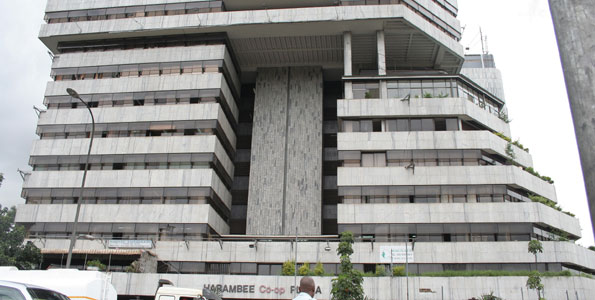 NAIROBI (HAN) May 29.2016. Public Diplomacy & Regional Security News. Savings and credit co-operative societies in Kenya are set for integration into the mainstream of financial service providers, a development that could see commercial banks lose third-party businesses.

An umbrella body of financial sector regulators has given the go-ahead for Saccos to lend money to each other through a Central Liquidity Facility (CLF). This is the first step towards Saccos joining the national payments system in their own right.

The CLF would give Saccos an equivalent of the clearing house run by the Kenya Bankers’ Association, which nets off obligations between banks both in the interbank market and in clearing of cheques.

The move is expected to be announced by Treasury Cabinet Secretary Henry Rotich in a few weeks when he reads the national budget.

The CLF would empower Saccos to issue their own cheques to their members unlike now when they are restricted to processing bankers’ cheques on behalf of banks on a revenue-sharing basis, which is heavily slanted in favour of banks.

CLF would also obviate the need for Saccos to get lines of credit from commercial banks at high interest rates that cannot be supported by the regulated terms on which Saccos lend to their members.

The move is part of efforts by the regulators to help Saccos manage cash constraints that have arisen following the introduction of new prudential guidelines for Deposit Taking Saccos (DTSs).

The EastAfrican has established that commercial banks could lose close to Ksh19 billion ($185 million) worth of loans that are currently granted to Saccos at inflated rates every year.

This is besides the loss of commissions on transactions executed by commercial banks on behalf of Saccos including issuing of cheque books, processing of personal cheques issued to Sacco members, Real Time Gross Settlement (RTGS) and Electronic Funds Transfers (EFTs) services where some banks demand as much as 70 per cent of the commission.

Under the new regime, Saccos will run their own inter-Sacco market where they can lend and borrow from each other at reasonable rates to offset their financial positions.

The regulator —  Sacco Societies Regulatory Authority (Sasra) — has already commissioned an American consultant firm, Dave Grace & Associates, to carry out a feasibility study on the operability of the CLF in the Kenyan market.

The findings of the study are expected in July this year.

The findings will help Sasra prepare a draft policy document detailing the establishment and operations of the proposed market and legal amendments needed to buttress the independence of Saccos.

“We are exploring the possibility of a Central Liquidity Facility for deposit taking Saccos in Kenya. This facility will be the starting point for Saccos being admitted to the national payments system. We expect the consultant to finalise his work in the next two months,” Sasra chief executive John Mwaka told The EastAfrican.

Mr Mwaka said Saccos will be expected to manage their liquidity challenges through a well- structured and regulated market where their compliance with the laid down prudential guidelines can be easily monitored by the regulator.

“For Saccos to participate in the national payments system they have to be walked through a well thought-out mechanism. The Central Liquidity Facility will provide an opportunity for us to assess their preparedness,” said Mwaka.

The new prudential guidelines for DTSs were introduced in 2010 and the societies were given a four-year transition period to comply until June 18, 2014.

These regulations are meant to ensure that DTSs maintain a certain level of capital, which should be enough to protect member deposits and creditors against losses resulting from business risks.

These include a minimum core capital of Ksh 10 million ($97,392.8) and liquidity level of 15 per cent of  savings deposits and other short term liabilities in liquid assets.

Currently, Saccos are not part of the clearing house and  have no access to the national payment system, restricting them from offering certain financial products and services such as cheque books, foreign currency trading, Real Time Gross Settlement (RTGS) and Electronic Funds Transfers (EFTs).

Failure to access the national payments system and the clearing house has seen Saccos form partnership with banks to enable them to offer these services at a cost.  For instance, Family Bank partnered with Stima Sacco and the church-based Kingdom Sacco while ABC Bank joined Unaitas Sacco, Capital Sacco, Bingwa Sacco, Fortune Sacco and Imarika Sacco to  enable the societies  to offer a wider range of services beyond what they are mandated to offer on their own.

Under these arrangements, Sacco members are issued with cheque books and receive cheque processing services from their respective banks.

Other services offered by the lenders to the Saccos and their customers include trade finance services, treasury management services, agency banking and the local and international cash remittance services.

The need for Saccos to participate in the national payments system has been informed by their meteoric expansion over the past decade, with their assets of the target surpassing that of some small banks.

The latest data from Sasra shows that the regulator has so far licensed 177 deposit-taking Saccos (DTSs) with a membership of 3.2 million, out of 7,000 registered Saccos.These DTSs control Ksh240 billion ($2.33 billion) in deposits, Ksh250 billion ($2.43 billion) in net loans and advances and Ksh350 billion ($3.4 billion) worth of assets. Two weeks ago, the regulator  cancelled the licences of five Saccos  effectively stopping  them from taking deposits from the public because of  corporate governance and liquidity  challenges.