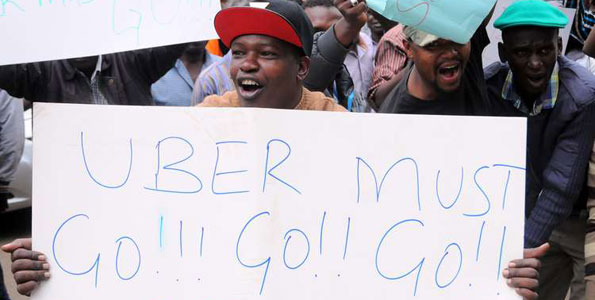 The group said, at a press conference on Wednesday, that it will stop taxi operations in Nairobi after the period lapses and hold street demonstrations until their demands are met.

They asked the government to intervene by creating a platform for both groups to lodge complaints, making it clear that they wanted Uber out of the Kenyan market.

“We would like to request the government and the relevant authorities to intervene and end the stampede between the local taxi operators and Uber,” read a statement by the organisation in part.

“We therefore as United Kenya Taxi Organisation wish to inform that we have loans to service, families to feed, children to educate and other responsibilities to cater for and are not ready to leave the transport industry to a foreigner set to render us jobless while we are in a democratic republic,” the statement added.

Tension has remained high since last month when the first case of harassment against Uber drivers was reported in Nairobi’s Westlands suburb.

Uber has put its drivers on high alert since the first attack and requested them to be extra careful in their operations.

The police said on Tuesday they had launched investigations into the matter.

Two people are set to be charged after they were arrested for breaking a windscreen of a car belonging to an Uber driver attacked at Valley Arcade in the capital’s Kilimani estate.

Regular taxi drivers claim that Uber’s cheap pricing model is denying them business and in retaliation have resulted to attacking taxi drivers using the app in a bid to drive them out of business.

Some members of the taxi organisation present during the press conference claimed to have gone for days without business.

Others carrying placards, chanted outside the press conference room saying “Uber must go.” Uber claims to have initiated talks with local taxi associations in a bid to work together, but their efforts have so far been unfruitful.

“Uber has been engaging with taxi associations since last year to find a way that we can partner with them. We do not feel that it should be about Uber or taxi but rather Uber and taxi,” Samantha Allenberg, Uber Africa Spokesperson said.

Ashford Mwangi, United Kenya Taxi Cab spokesman said that Uber has strict restrictions that hinder its members from being part of the movement.

“It is hard joining Uber because of its restrictions. First they demand the car to be almost new, making it hard for anyone who bought there taxi in 2009 to join them because we all cannot afford new cars,” he said.

But even as they fight the new entrants, the taxi drivers’ organisation is said to be working on its own application to keep up with market trends. It is not however clear when it would be ready for the market.