Home frontpage Kenya: Somali Writer is under intense scrutiny, "The Rule of Apostasy in... 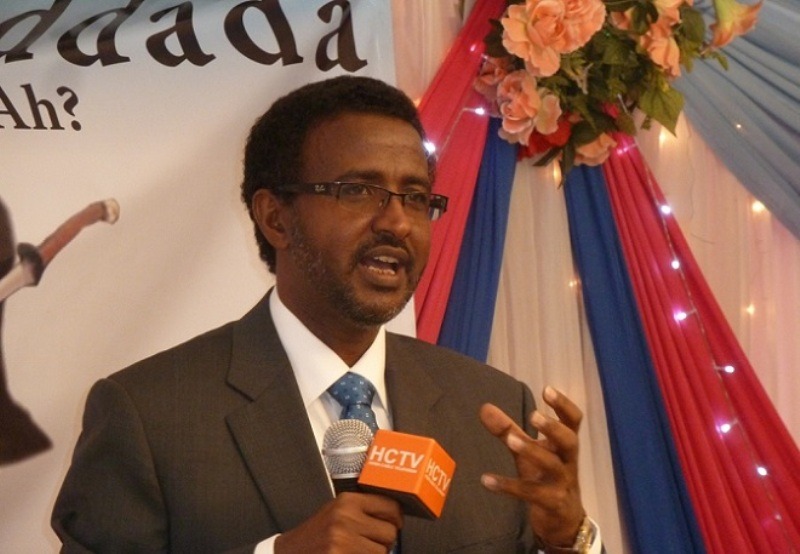 Somali author Abdisaid Abdi Ismail has come under intense scrutiny after publishing a Somali language book titled “The Rule of Apostasy in Islam: Is it True?” in which he argues that there is no religious justification for killing people for apostasy.

The book sparked mixed reactions among the Somali community in Kenya and Somalia following its launch in Nairobi on September 14th.

After some clerics called for the book to be banned and burned, most Somali bookstores in Eastleigh stopped selling it, and it is now being sold “discreetly” in a few bookstores in Garissa and Nairobi as well as online, Ismail said.

Ismail, a 50-year-old Galkayo native, was received a scholarship from Umm al-Qura University in Mecca, Saudi Arabia, where he studied sharia law and advocacy, graduating in 2002 with a master’s degree in Islamic economics. Since then, Ismail has written two books in Arabic, “Muslim Countries’ Expanding Debt Dilemma” and “Globalisation in the Muslim World: Facts and Figures”, and two other books in Somali, “How to Eradicate Poverty” and “Introduction to Islamic Economics”.

Ismail, a father of three, has taught economics at East Africa University in Bosaso since 2009, but says he cannot go back to Somalia now due to death threats he has received since publishing his latest book in Nairobi.

In an exclusive interview with Sabahi, Ismail talks about why it is important to discuss the subject of apostasy in Islam, his research on the topic, and the need to promote and tolerate a healthy debate on diverse ideas among Somalis.

Sabahi: Tell us more about your book and why you wrote it.

Abdisaid Abdi Ismail: The main thesis of this book is about apostasy in Islam, but I also talked about several other issues such as state and religion, gender equality in terms of blood money, death by stoning of adulterers and adulteresses, et cetera.

I wrote this book for the Somali community to let them know some of the big issues in their religion that involve their life in this world and hereafter, which some Somali clerics continuously explain in a way that does not match the real meaning of the Islamic teachings.

I hope that the people who read this book will realise what Islam says about the issues covered by the book, but the core message is that Islam is the religion of humanity and mercy, and it values above all the life of human beings.


Sabahi: You made the issue of apostasy your main focus. Why do you think it is so relevant now and important for Somalis to understand?

Ismail: It is a very important issue in [Muslim] society today because extremist groups are using the apostasy issue as a tool to justify their heinous and brutal killing against those who oppose their erroneous interpretation of Islam or even their political agenda.

This issue is very important for the Muslim community in general, but especially for the Somali community, because their blood is being shed on a daily basis using apostasy as a tool to justify it.

I believe the topic deserves to be discussed in a broader way in the current situation of the Muslim world. I would have liked if someone else could have written about it, but unfortunately no one has written about it and that has forced me to do it now, and I chose the Somali language so as to be able to reach Somali speaking peoples in East Africa and throughout the world at large.

Sabahi: Is death an adequate punishment for apostasy and in line with Islamic teachings?

Ismail: I have been researching the issue of apostasy for a while, comparing the various perspectives and the evidences that each extremist group is using and what the Qur’an and the teachings of the prophet said about it.

What my findings led me to conclude is that the death penalty for apostasy does not have any valid argument in Islam even though it has been used for centuries for political purposes by ruling elites in successive historical Muslim regimes as a form of treason for Muslims who left the religion, because religion was an all-encompassing identity for people at the time.

Sabahi: What does your research say is the correct punishment for apostasy according to Islam?

Ismail: Based on scholarly review of the religious teachings, my view regarding apostasy is that there is no punishment for apostasy in this world. The punishment is in the hereafter and it is between the individual and God.

Freedom of religion and beliefs are some of the basic human rights and no one has a right to interfere with what others believe. Diversity and different ideas and opinions are very crucial for co-existence, coherence and development of any society.

Sabahi: Why should Muslims read this book?

Ismail: They should read it because they need to know the lack of authentic justification for apostasy punishment in Islam, which I am satisfied that there is no valid support to back up the death penalty for apostasy in Islam.

The book will clarify for readers many other issues directly or indirectly related to the issue of apostasy and will hopefully dissuade groups from using [this issue] to kill people [based] on false justification.

I am hopeful that as [the number of] people reading the book increases, the madness sweeping in my country will ease a little bit and youths will eventually realise they are being used against their people under an un-Islamic pretext.

Sabahi: What is lacking in the conversation among Somalis when debating these issues and ideas?

Ismail: Several points are lacking in this matter, such as critical thinking and new scholars who can interpret the Qur’an and the hadith (the teachings of Prophet Mohammed) according to its original context without the interest of specific groups who want to hijack Islam for their own benefits.

There has to be an open and free dialogue among scholars and the masses as to how to interpret Islamic sources in a way that can help Muslims live a civilised and tolerant way of life as they should, so that it can lead them to live in peace among themselves and with others in this global world of ours.

Sabahi: What is the source of al-Shabaab’s ideology?

Ismail: I believe that al-Shabaab and other similar groups are just implementing the teachings and understanding of some hardline Islamic scholars who interpret some Islamic scriptures according to their agenda.

To get rid of al-Shabaab and other extremists, first we need to explain the Qur’an and hadith and other Islamic sources of knowledge according to their original context. The war against al-Shabaab and other fundamentalists is a war for the hearts and minds of Muslim society and to win that war we have to reveal the real nature of Islam which is peaceful, tolerant, moderate and democratic.

Sabahi: Groups such as al-Shabaab argue they are trying to recreate society exactly as it was at the time of the Prophet Mohammed. What is wrong with that?

Ismail: There is nothing wrong with that, but who is presenting that? My argument is that we need to understand the real Islam, not the politicised Islam.

On the other hand, we have to take into consideration the difference between the time that the Prophet Mohammed, peace be upon him, and his companions lived, and our world, in the 21st century, when the circumstance of life are completely different.

Sabahi: Did you expect such a negative reaction to your book?

Ismail: Frankly, I was expecting the book to create academic debate among scholars, but I never expected that someone would call for the burning of the book and declare the author an apostate.

That is the very thing that the book was trying to address and it seems those who are critical of it have not actually understood the main message of the book, which is [to promote] dialogue and discussion.

However, there have been positive responses from various quarters who say the time was right to raise the issue.

Sabahi: How are you doing and what is next for you?

Now I am just trying to save myself from some of those extremists and their supporters who have not hidden their intentions to harm me after my book. My movements are discreet and restricted, most of the time I am indoors.

At the same time, I am working on how the peaceful Islam can be spread among Somali society. I will never be stopped or intimidated from speaking and discussing issues that I feel are important to bringing the correct and real Islam to my society. I will continue to reveal the truth about the correct stance of the religion regarding several issues that I addressed in this book and other issues.