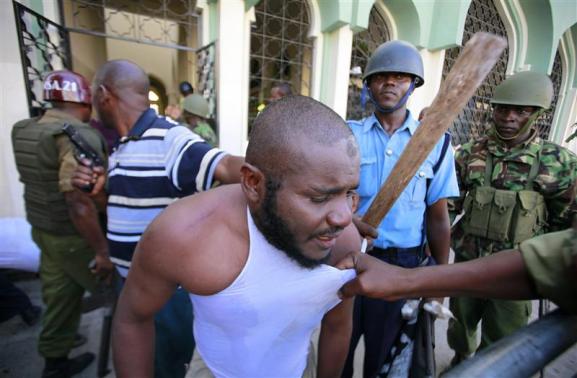 Nairobi (HAN) March 18, 2014 – Kenya police force has raided a well-known Sufi center at MacKinnon Road, a town in Kenya. The city is famous for its Sufi saint’s burial places. The prominent 20th century Sufi saints and shiekhs buried at MacKinnon include Seyyid Baghali Ali Shah who is the first saint buried in MacKinnon in 1902;

the Eminent saint Sheikh Mohammed Ramole and the great Sufi sheikh and saint sheikh Hassan Qoryole. Sheikh Qoryole is the founder of southern Somalia Ahlusunna Waljama –a Sufi religious organization fighting against Al-shabab in southern Somalia and who with the help of Kenya armed forces succeeded to clear Al-shabaab forces out of Gedo region in southern Somalia including Balad-hawo, Luq, Garbaharrey and many other places.

Shiekh Qoryole was wounded in southern Somalia and flown to Nairobi by Kenya armed forces to treat his wounds but died in Kenya. The Kenyan Sufi shiekhs at MacKinnon Road requested the Somali Ahlusunna to bury the sheikh at MacKinnon Road. The Somali Ahlusunna welcomed this gesture because they believe the sheikh is buried in Mackinnon; the sheikh’s grave is safe from al-shabab affiliates to dig-out his grave.

To counter the growing youth radicalization in Kenya, the Sufi shiekhs at MacKinnon, started to teach the young people the Sufi principles of peace and tolerance. This effort, attracted parents who are skeptical about the youth radicalization and brought their children to MacKinnon to teach them the Sufi tradition ofpeace and tolerance. The sick people also come from deferent parts of Kenya. Many people also come daily to pay their respect to one or more Sufi shines. These and other factors, attracted many more Sufi disciples from deferent part of Kenya especially from Nairobi, Wajir, Bangal, Nguma, Garisa, Bura, Habaswain, Mombasa, siolo and other parts of Kenya to study Sufi traditions, hense, the town was growing fast in the last eight years and got many new buildings and mosques.

Unfortunately, this success attracted two rival groups. On the one hand, though the local people are happy with this growing trend, benefitting occupation and other benefits, regrettably some local business individuals became jealous; On the other hand, the Wahabis – who are known for their affiliations with radical Islamic groups- are very much, concern the growing Sufi influence in the area.

Yesterday at 3:00pm, Kenyan security forces raided the well-known Sufi centre at Makinon Road and took to Kinango police station all the people at the Zawiyya (the centre) totaling 91 including 34 children some as young as 2 yrs old. They released some 20 people and kept some 71 others including all the children, sick people and people with genuine documents such as Kenyan IDs and passports with visas.

This raid astonished the ahlusunna people in Kenya. The questions people asking are why Kenyan police raided a well-known Sufi centre known for their strict opposition against radicalism and extremism. Why police are keeping children in custody for 2 days? It is widely believed that it is either some individual the local business people who are jealous against the growing influence of Sufis in the area or the Wahabis radical groups are behind this move using the police hand.

Whoever behind this unfair and injustice raid, it is obvious that the raid produced bad results, which will definitely damage the cordial relationship that existed between the ahlusunna Sufis and Kenyan government specially the security sector. It is also obvious that the terrorists –the radical Islamists- are smiling for some time