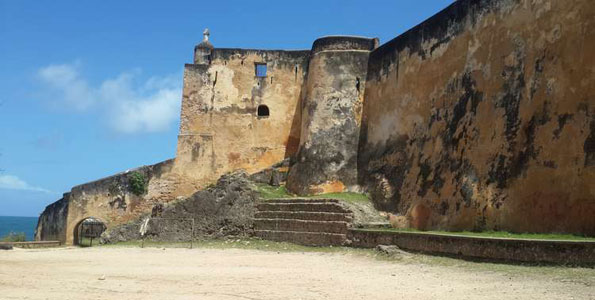 By FRED OLUOCH. Fort Jesus in Mombasa County, one of Kenya’s famous historical monuments will benefit from a $3.9 million restoration project that will see it receive a major facelift.

The seafront of the 16th century fort is currently being eroded by rising tides, which are also chipping away at its coral foundation and compromising its structural integrity. The facelift will increase the shoreline by reclaiming two acres from the ocean.

The project, which will take two years, is a reaction to the recent study by Unesco warning that heritage sites and landmarks such as Fort Jesus in Mombasa, the Vasco da Gama Pillar in Malindi on the North Coast, and the Old British Customs House in Vanga, Msambweni County on the South Coast — all situated on the seashore — face an uncertain future due to rising sea levels.

The latest report by the Inter-Governmental Panel on Climate Change says that Mombasa island and other coastal cities and towns on the eastern seaboard of Africa could be submerged in the next 50 years due to the effects of climate change.

According to the National Museums of Kenya (NMK) chief of physical planning, Kassim Omar, the engineers who are currently carrying out geotechnical tests at Fort Jesus will first build a 200-metre wall to reinforce the base rock on which the fort stands. The National Museums of Kenya is the government agency managing Fort Jesus and other historical monuments and sites.

Mr Omar said that the fort’s shoreline is shrinking by between a half and one metre annually due to global warming and if not checked, the foundation of the fort, which is coral rock, will be seriously undermined in the next 10 years and could cause the collapse of the fort.

The effects of rising sea tides on the coral rocks near Fort Jesus. Scientists have warned that eventually the coral shoreline will be submerged. PHOTO | FRED OLUOCH |NATION MEDIA GROUP

The conservation project will not only protect the fort’s foundation from the high tides that are threatening it, but will also add approximately two acres of land to the shoreline from land reclaimed from the ocean. The reclamation will stretch past the seafront at the Mombasa Hospital to the Mombasa Golf Club adjacent to the fort.

The reclaimed land will be used for recreational and commercial purposes and the NMK plans to build simple but modern structures to be leased to private business operators.

Over the years, the base of the fort has been eroded by the rising sea tides and sewage from the town that discharges near the fort’s sea front.

Prior to the government rescue plan, Fort Jesus — one of seven Unesco World Heritage Sites in Kenya — had not received adequate budget allocations to hire technical expertise such as marine engineers to monitor and check erosion caused by rising sea waters. Graffiti, both written and engraved on the coral walls inside and outside the fort, is also a major problem for NMK conservation efforts.

Dr Mzalendo Kibunjia, the director-general of the Museum, said that the institution has been doing everything possible to conserve the country’s historic and cultural edifices for posterity. Most of those at the Coast are threatened by rising sea levels.

“But the funding will now enable us to control the threats of erosion caused by the rising sea levels that have been threatening Fort Jesus, which plays a central role in promoting tourism at the Coast, especially around Mombasa’s Old Town,” said Dr Kibunjia.

Fort Jesus is one of the finest examples of 16th century Portuguese military architecture. The fort was built by the Portuguese between 1593 and 1596 by the order of King Phillip 1 of Portugal, then ruler of the joint Portuguese and Spanish kingdoms.

It was strategically positioned on what was a coral reef right at the entry to the channel (later named English Channel), to guard the Old Port of Mombasa and to offer security to Portuguese settlers living on the East African Coast.

Graffiti, both written and engraved on the coral walls inside and outside Fort Jesus, is also a major problem for the National Museums of Kenya conservation efforts. PHOTO | FRED OLUOCH |

Lakes Nakuru, Elementeita and Bogoria form an important stop-over site for migratory birds from Europe, Asia and South Africa, and provide unique biodiversities that sustain 75 per cent of the globally threatened population of Lesser Flamingos, Lesser Kestrel and white-headed vultures.

Being on the World Heritage List means that a cultural site or landscape has been recognised for its value to humankind and makes it possible for the site to receive global funding for conservation.

“It is important that we conserve our monuments, which are after all part of our history,” said Mr Omar.